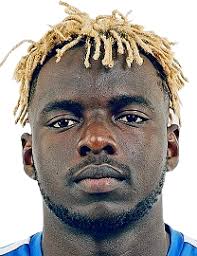 Nigerian international, Muyiwa Olabiran was the match saviour for Ukrainian side Olimpik Donetsk as he scored one and assisted another in their entertaining 3-3 draw against Mariupol at the Valeriy Lobanovski in Kyiv, AOIFootball.com reports.

Having scored in their away win at Kolos, the former U-23 forward kept his place in the starting with the host hoping to move into the top 4 with a win.

Both sides went at each other from the blast of the whistle and should have both scored in the opening twenty-minute but poor composure in front of goal saw the visitors particularly missing two sitters before they both struck the woodwork all before the half-hour mark.

Olabiran then went into the referee bad book picking up a yellow card on 33 minutes but the Nigerian made up for the card as he opened scoring three minute later firing into an empty net after the goalkeeper initially partied a shot towards his direction for 1-0.

The goal did bring out the best from the visitors as they somehow overturned the scoreline with three minutes with Danylo Sikan and Dmytro Myshnov both scoring from 12 yards to make it 1-2 at half time.

Viacheslav Tankovskyi then made it 3–2 to the visitors in the second period with Olimpik having a mounting to climb with just 17 minutes left in the clock.

Down but not out, Sergiy Politylo pulled one back 11 minutes from time before Olabiran ensured the points were shared deep into stoppage time when he wiggled past his markers before setting up Ibrahim Kargbo who fired into an empty net to make it 3-3.

The 22-year-old has now been directly involved in 5 goals this campaign, scoring twice and also providing 3 assists in 7 league starts since joining on loan from Dynamo Kyiv.