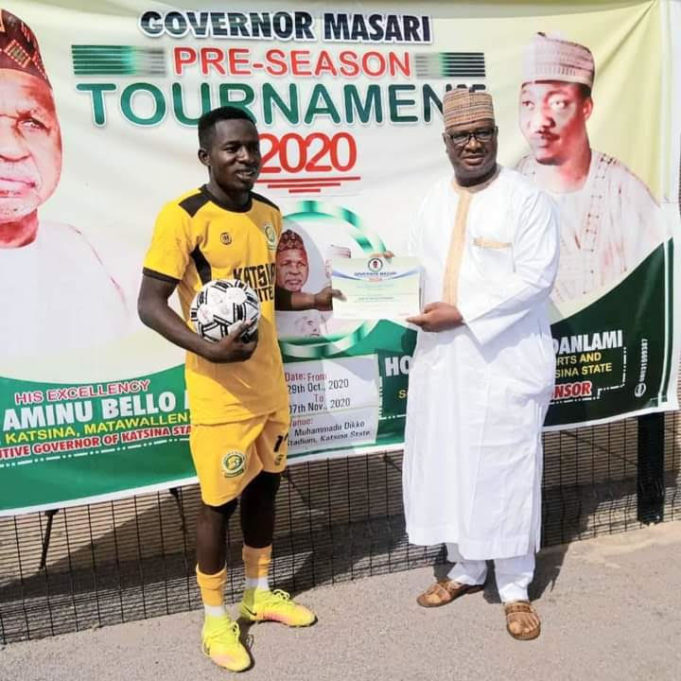 Former IfeanyiUbah influential attacker, Samuel Kalu has promised fans of Katsina United Football Club that he will do all within his power to write the club’s name in the annals of history, in the Nigeria Professional Football League, AOIFootball.com reports.
The Kano State born fleet-footed player who spoke exclusively to AOIFootball.com shortly after bagging a hat-trick and winning the Man of The Match award in one of the games at the Governor Masari Pre Season Tournament vowed to write his name in gold for the club when the 2020/2021 NPFL season kicks off.
“I’ve promised the fans of this great club that this season is going to be different, by the grace of God, said Kalu, who also got his side’s opener in their 4-0 thrashing of former NPFL Champions, Plateau United, in the same competition.
“I want to write my name in gold by making positive impacts here; my desire is to leave a great legacy at the club.
The Chanji Boys, as Katsina United FC are fondly called, have made it to the final of the ongoing Governor Masari Pre Season Tournament. They look unstoppable, having not lost any game since the competition started, and the former Jossy United FC player said his side is ready to replicate the same performance when the season the new NPFL season kick starts.
“I believe we can win games like this too when the new season commences, he said.
“Our team is a perfect blend of both experience and youthfulness, and we’re ready for the new season,” concluded Kalu.