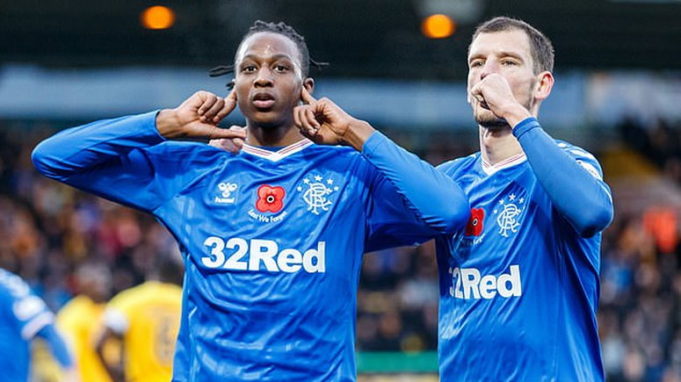 Super Eagles midfielder, Joe Aribo signed off for the international break in superb fashion on Saturday when he scored twice to help Rangers stretch their unbeaten start to the season to 20 games following their 8-0 thrashing of Hamilton Academically, AOIFootball.com reports.

Having fired blanks on Thursday’s Europa League clash away at Benfica, Aribo started his 6th league game of the campaign whilst fellow Eagle Leon Balogun returned to the starting XI.

Unbeaten in their opening 13 league games this campaign, the hosts laid down an early marker in the clash when Scott Arfield put them ahead on the 16th minute before Kemar Roofe made it 2-0 two minutes later.

Aribo then added to Rangers’ lead when he fired home for 3-0 on the 19 th minute before he then grabbed his brace 9 minutes from half time as Rangers all but secured the 3 points with a massive 4-0 lead.

Kamar Roofe then added his second of the game to make it 5-0 in the second half with further goals from substitute Brandon Barker and a brace from James Tavernier completing their biggest win of the season so far.

The win further widens the gap between rivals Celtic as Rangers stay 9 points clear of the defending champions who have played two games less.