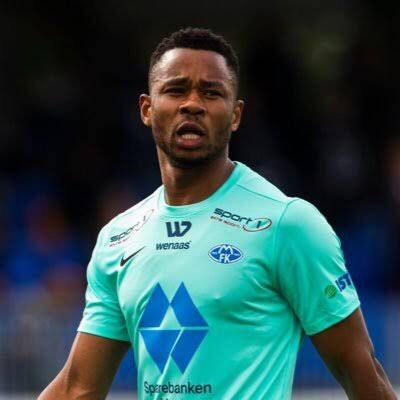 Nigerian forward Leke James continued his impressive run in the Norwegian Eliteserien as he scored a goal in each half to propel Molde FK to an impressive 3-0 away win at Stabæk Football, AOIFootball.com reports.

The former Bridge FC of Lagos forward started just his 13th league game of the campaign with the visitors looking to further strengthen their hold on the second position on the log standings.

Despite dominating the opening exchanges the visitors had to wait till almost the last kick of the first half to take the lead when the lively James bundled home from a Birk Risa cross as they went into the break 1-0 up.

Second-half substitute Stein Gregersen then made it 2-0 nine minutes from time before James struck the crossbar moments afterwards as scores remain 2-0 in favour of the visitors.

The 28-year-old was however not to be denied his brace as he bundled home five minutes from time to complete a perfect evening for the visitors who ran out 3-0 winners as they now switch their attention to Thursday’s home Europa League clash against Arsenal.

The Nigerian was rightly adjudged the man of the match with a rating of 8.2, as he took his league tally to 11 goals in 13 starts, 6 short of the 17 goals he scored last season.