The Special Adviser to the Ondo State Governor on Political and Mobilization Matters, and the immediate past Chairman of the Ondo State Football Agency (ODSFA), Akin Akinbobola has commended the Nigerian Professional Football League (NPFL) for promoting football in Nigeria to a level that gives us hope that it can, in no distant time, be a major pillar of support to the Nigerian economy.
Akinbobola, who hosted newsmen in his Alagbaka office on Monday 16th of January, 2017, congratulated the chairman of the Nigerian Professional Football League, Alhaji Shehu Dikko as the league 2017 matches kick off. He said he can categorically say, as a stakeholder in the Nigerian Professional Football League, that Alhaji Shehu Dikko has taken football in Nigeria to an enviable level that gives us hope that in no time, we will be like developed and enviable leagues in the world. 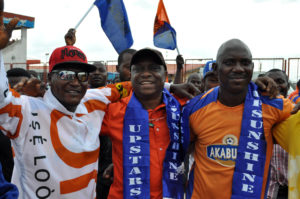 He appreciated the working synergy between the League Management Company (LMC) and the Nigerian Football Federation (NFF), not leaving out the security agencies and the team’s supporters’ clubs.
He charged the media to give good colour and positive hype to our league and the clubs, he gave a big bravo to Super sports TV for promoting the Nigerian league and implored them to do more. Akinbobola urged the Federal Government to understand that the League can contribute immensely to our GDP as Football generates employment and is a wealth creation agent. He counseled State Governors and Corporate organizations to direct their attention in this regard, and as Nigerians make up our minds and put in everything humanly possible to make our league the best in Africa and one of the best in the whole world.
Akinbobola stressed that with the present calibre of people managing the League coupled with the transparency, hard work and diligence that they have displayed, all we need now is to support them in promoting Nigerian Football. We cannot continue to celebrate foreign leagues while we jettison the enormous potentials in our own football. What we call foreign leagues are also local league somewhere else.