John Ugochukwu Ogu has laced his boot 12 times for the Super Eagles of Nigeria and currently plays his football in the Israeli Premier League with Hapoel Beer Sheva.

He is very keen about his club’s success this season and believes it is a feat that is achievable only if they stay focused.

The former Academica De Coimbra midfield enforcer, who is optimistic about Nigerian football and the Super Eagles new set up, spoke exclusively to aoifootball.com on his club’s chances this term, and the Super Eagles’ chances in the CAF 2019 AFCON Qualifiers and the World Cup qualifying race. Excerpts:

Your team has been high flying and on a run to claim the league title? Though it’s still a marathon, do you think you can remain on top till the end of the season?

Yes, it is true that the season isn’t over but we are focused and always want to improve on every game. We hope to maintain the wins and stay on top till the season ends.

Each season, our stats show your improvement is about a 100%; what’s been the motivating factor, and do you see yourself elsewhere soon; I mean somewhere in Europe’s top five leagues?

First of all, I want to thank God, my family, club and fans for everything. God has been faithful and the fans have been so supportive.

If I could leave here to top leagues in the world, I would love to, but I have a contract here and my agents as well. Hopefully, if anything comes up I will go for it because I’m open to new challenges in my career. 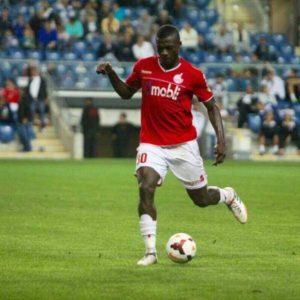 The Super Eagles are going through a phase; do you think missing back to back AFCONs is a blessing in disguise for the team to get a bigger slot and performance at the world stage, having started the World Cup qualifying race on a high?

I think so too. However painful, the AFCON misses are in the past now and we have to focus on the present and future. Missing it back to back is still painful, though. But I think we have learnt from it.

You’ve watched the Cameroonian team and that of Algeria too; what have you observed are their weaknesses ahead of the clashes against them in Nigeria’s next set of matches for the World Cup qualifiers?

I think Cameroon looks physically strong but we will be able to handle them. All we need to do is focus on training and work on the tactics provided by the coaching crew. By the time we deal with Cameroon, Algeria would not be an issue.

How will you describe the unity in the camp of the Super Eagles? Are you guys as a team motivated by material or cash support?

I think the unity is strong as always. Everyone could see that from the camp, trainings and games. Everyone is happy for each other both the ones not playing and I think that has been a major factor to the team’s performances so far.

The credit should go to the Nigeria Football Federation (NFF) and the coaching crew.

No one is motivated by material or cash support. We love our country and are excited to take Nigeria football to the top where it belongs.

Many people have tried to tag you to some big players, especially those that have excelled playing your position. Who can you say is your Idol or role model in football?

I hope to score more goals for Galatasaray this season- Onyekuru