VFL Wolfsburg striker, Victor Osimhen has been ruled out of action for the next three weeks with injury.

The Nigerian international who just inked a deal with the German outfit, injured his right knee during training and is currently undergoing rehabilitation. 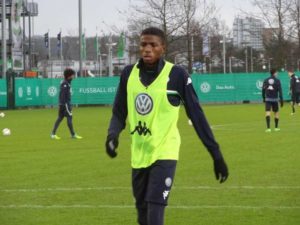 Osimhen impressed Coach Valerien Ismael when he featured in a warm up game for his team last December ahead of his final signature which happened in January.

Aoifootball gathered that the striker will not be undergoing any operation as it is not a serious injury.

Abdulquadir Adedapo - May 16, 2018
ALL CATEGORIES
SOUNDCLOUD