Its now two years since the death of former Rayo Vallecano goalkeeper Wilfred Agbonavbare, his memory lives on at the club and fondly remembered as one of the Africa conquering, and world shocking Nigerian team of 1994.

Wilfred Agbonavbare, who was Rayo Vallecano’s goalkeeper between 1990 and 1996, died after a battle with cancer. He passed away on January 27 2015 at the age of 48. 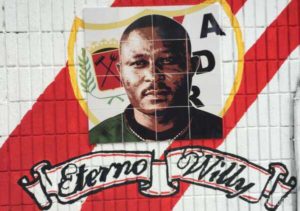 Rayo Vallecano did their very best for Wilfred’s children to fly from Nigeria to see their father before he died, but all the paperwork and bureaucratic steps to be taken were not completed in time and tragically, Wilfred died before their arrival.

Three days after he had passed on, the Spanish club decided to immortalise Agbonavbare by naming a gate at their stadium after him. The Gate 1 Vallecas Stadium was renamed, Gate Wilfred Agbonavbare.

William Agbonavbare was second choice goalkeeper to Peter Rufai in the glorious years of the Super Eagles.