Super Eagles’ defender, Elderson Echiejile has been unveiled as a player of La Liga outfit, Sporting Gijon at a press conference earlier today.

The left wing back, who joined on loan from French Ligue1 high-flyers, AS Monaco on deadline day, described the La liga as the greatest league in the world and he is happy to represent Sporting Gijon in the league.

“Challenge-wise and football-wise, the Spanish League is the greatest league in Europe. Sporting Gijon was recommended by the Director at Monaco and he told me the ambience here is impressive and I have met it the way he described it”, enthused Echiejile. 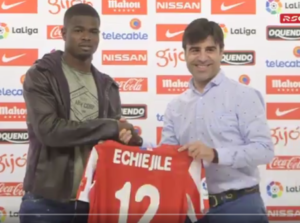 Echiejile has been handed the No. 12 jersey.

The Super Eagles defender trained with the club today and will be featuring in this weekend’s La liga Match Day 21 clash against Alaves.