“N’Golo is playing very well.” Glowing praise from manager Antonio Conte after Kante had made a season-high 14 tackles in a Premier League match this season as the Frenchman put in a battling display in the 1-1 draw with Liverpool. “He has to improve his build-up play,” Conte went on to add of his midfield destroyer after the 3-1 win over Arsenal. It’s hard to believe a player who won the Premier League last season and is on course to add to his collection this term can improve, but Conte is a manager who demands perfection.

His passionate outbursts on the touchline have seen him rapidly endear himself to fans, yet highlight how much he craves the perfect performance from his players. No matter how Chelsea are faring, Conte doesn’t change his attitude, while his quest for 100% from his players extends to every performer. Kante, despite his ability to marshal the midfield with ease, isn’t immune to the criticism of his manager as Conte’s quotes from the weekend prove.

The Frenchman has garnered a respectable WhoScored rating of 7.29 in his debut campaign at Stamford Bridge, though that pales in comparison to the 7.61 he earned during his season with Leicester. That being said, much of that is down to the differing approach for both teams. Leicester’s title win was built on sitting deep and inviting pressure, only to break forward, win the ball and hit opponents on the break, which they did with ruthless efficiency. 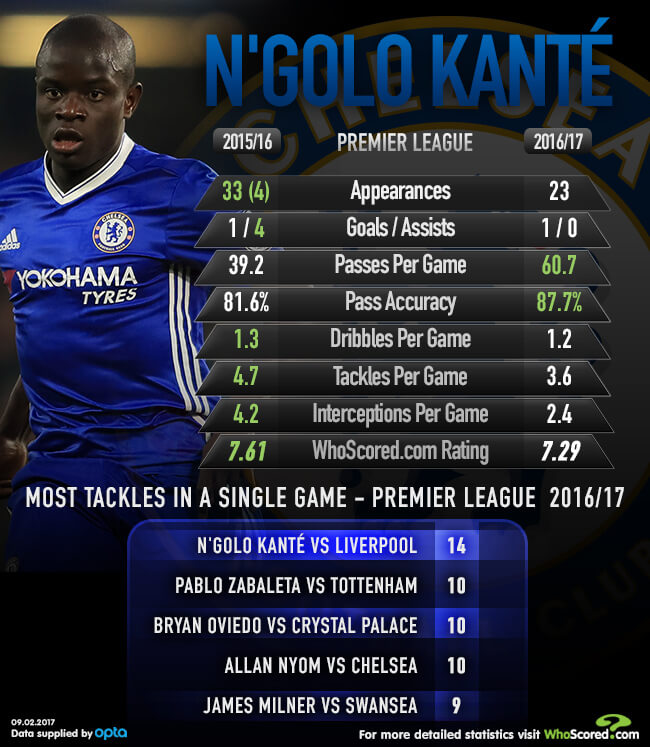 Kante had such an influential role to play in the domestic success at the King Power Stadium, with the 25-year-old averaging a stunning 5.2 tackles per 90 as he routinely won possession for his team before Leicester would blitz opponents. With Chelsea averaging 53.2% possession this season, the number of tackles per 90 (3.6) was always going to drop, but that doesn’t take anything away from his importance under Conte. As a combative midfielder during his playing days, Conte knows what’s required from his holding man, so it’s perhaps no surprise he has highlighted areas in Kante’s game that can be improved upon.

The France international may be averaging the second most passes per game (60.7) of all Chelsea players, while a pass success rate of 87.7% also ranks highly at the club, but with just 26.6% of Kante’s passes going forward, it’s evident what Conte means when he talks of improving his build-up play. 0.7 key passes per game is a modest return at best for Kante, even if his job isn’t to provide the pass the leads to a chance for his attacking teammate.

Yet, Conte is referring more to the lack of momentum Kante provides for the team, particularly once the midfielder wins the ball, which is a massively underrated quality to his game. He has made more tackles and interceptions combined (467) than any other Premier League player since the start of last season, so his ball winning ability has rarely – if at all – been called into question. However, with Kante preferring to shift the ball sideways – 845 of 1396 Premier League passes (60.5%) have gone sideways – Chelsea have at times lost the momentum they will have gained once he wins the ball.

Nevertheless, this is a minor critique for the player. Given Chelsea’s above possession return is the lowest of the Premier League’s top-6, Kante’s ball winning qualities are often put to good use, particularly against the bigger teams. While Leicester were lucky enough to tie down Jamie Vardy and Riyad Mahrez to new deals, the departure of Kante has hurt them even more than originally anticipated. The Foxes sit just one point above the relegation zone and are in danger of becoming the first defending champions since Manchester City in 1938 to be relegated the season after a title win.

Their loss, though, is undoubtedly Chelsea’s gain. Some may even go as far as to suggest that Kante already ranks among Chelsea’s greatest holding midfielders, which is a big claim to make given the Blues have had Claude Makelele and Michael Essien on their books. This, however, merely highlights just how effective Kante has been during his short time in the capital, often seemingly carrying out the defensive duties as two men.

As manager, Conte has every right to demand more from his midfield lynchpin, but this perhaps says more about the Italian’s sky-high standards rather than Kante’s own performance levels. He is without question one of the best players in his position in the Premier League and with nine points separating the Blues and second-placed Spurs, the title is very much Chelsea’s to lose. Should the west London side lift their fifth Premier League trophy come May, then it’s Kante who, like with Leicester last season, will have played an absolutely vital role in the domestic win.