Enugu Rangers’ defender, Etim Matthew believes the club can go on to win this year’s CAF Champions League title, after the team recorded a 1st leg away result in Algeria but need more motivation.

Rangers forced hosts JS Saoura of Algeria to a 1-1 draw in the first leg of the preliminary round.

Etim Matthew, who played all 90 minutes for the Flying Antelopes, praised his teammates for the performance, despite getting a draw instead of a win which they wanted.

“Getting a draw away from home isn’t all that bad but we wished we had won. We are however thankful for the result and hope for a more favourable result in the second leg”.

He called on the fans and management of the team to do everything possible in assisting the team get the desired result in the second leg of the tie.

“Like we saw in Algeria, the fans stood up behind their team and supported them till the end. We expect even far better support from our fans at home come Sunday.
On the part of the management, we pray for more motivation and incentives. We hope that in the end things would be better for us. We just wish to be motivated”. 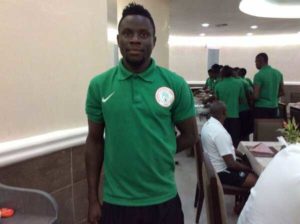 Etim assured of the players’ readiness to give their all and conquer Africa if properly motivated.

“On our part, we the players know the task ahead and we are upbeat and ready to give in our best provided we are motivated adequately. The target of every team is to lift the trophy in a competition and ours is not different”.

Enugu Rangers host JS Saoura in the second leg of the champions league preliminary round at the Nnamdi Azikwe stadium in 7 days.

The Nigerian champions hold the advantage having pulled a 1-1 draw in Algeria, and will be hoping to secure the result needed to progress to the next round of the competition.