Former Super Eagles’ striker, Yakubu Aiyegbeni has signed for Coventry City until the end of the season.

The 34-year-old Nigeria striker has played for the likes of Everton FC, Blackburn Rovers, Middlesbrough and more championship sides in England. He has been unveiled by Coventry and his squad number is 22. 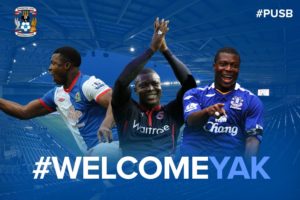 The coach of the side, Russell Slade, who is so pleased to have Yakubu in his Squad, said

“We’re pleased to have secured the signing of Yakubu, who brings vast experience and a terrific goal record.

“His professional career speaks for itself, having scored consistently at the highest level of English football, and will act as a superb role model for the younger players. He is astute on the ball, has clear quality and presence, and we’ll continue to work on his match fitness as we prepare for the final 16 games of this season”, said Slade.

Yakubu, who has been out of contract since his deal expired with Kayserispor in Turkey last summer, will be looking forward to help his new club escape the drop as they occupy 24th position on the League One table with 21 points after 30 games.