Newly elected Confederation of African Football (CAF) president Ahmad Ahmad has stand down as vice president of the Madagascar Senate.

Ahmed, who is also the Madagascar Football Federation (MFF) boss tendered his resignation today at 4:45 PM local time to vacate the office he has occupied since February 2016.

The 57-year-old former AC Sotema coach was later received officially by the members of the MFF and Muslim community at Carlton hotel in Antananarivo where he addressed the gathering. 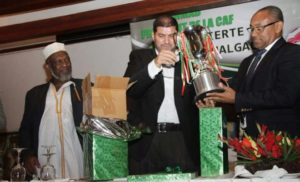 Hayatou was seeking a record 8th straight term in office. The Cameronian was first elected to head the largest member of FIFA, the world’s football governing body, in March 1988.

Ahmad, a two-time government minister, is also expected to vacate his position as the MFF president as required by the CAF rules.

This could happen as soon as tomorrow, according to a reliable source, with MFF’s 1st vice president Doda Andriamiasasoa expected to take over the reigns on an interim basis pending elections.

I told Osimhen I was going to celebrate like Ronaldo when I scored against...