Rangers faltered once again in their Nigeria Professional Football League (NPFL) title defence after they were held to a 1-1 draw by fellow relegation battlers Remo Stars in Enugu on Wednesday.

The champions went ahead in fortuitous fashion just before the quarter hour mark when Daniel Etor’s tame effort went through the legs of Remo Stars goalkeeper David Walbe. The visitors got their leveller through Ekene Awazie whose spectacular effort on 51 minutes confounded The Cathedral and its worshippers.

With both teams playing miles away in Matchday 15 on Sunday, the exertions of their travels was evident for all to see in the opening exchanges as both teams, especially the hosts lacked the required urgency and tempo for a top flight game.

The hosts however went in front on 14 minutes when former Enyimba winger Daniel Etor’s miscued effort went through the hands and under the legs of former ABS goalkeeper David Walbe to give them a shock lead. Walbe himself was starting for Remo Stars because of such mistake by Chizoba Ndukwe but covered himself in no glory with such error.

With the Champions in cruise control, they almost doubled their advantage six minutes later when Chizoba Amaefule, starting his third league game in a row floated a precise cross for Ocheme Edoh. The former Giwa man’s header however missed the target by the whiskers.

Goalscorer Daniel Etor was substituted with about ten minutes to end the first half as Onoriode Odah made his return to the club since the 2014/15 season.

The visitors prepared Rangers for what to expect in the second half when they almost draw level on the dot of half time. Petite midfielder Salefu Ochowechi flicked David Onovo’s corner kick goal wards but Rangers goalie Nana Bonsu tipped it over before it landed just under the cross bar.

Six minutes after the restart though, and the visitors went level. Attacker Ekene Awazie controlled a hasty clearance at the edge of the box, dummied two Rangers defenders before firing high into the roof of the net from 16 yards.

The hosts failed to produce any sort of response and it was the visitors that looked likelier to get a winner but Bonsu twice produced point blank saves to deny Ochowechi, including one, eight minutes from time.

Although Remo Stars dropped back to the red zone, they went home with a fully deserved point while Rangers continue to fumble and crumble under the weight of expectations.

Other results of Match Day 16: 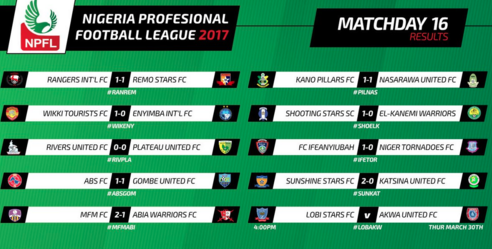 Miracle Gabriel - May 31, 2019
ALL CATEGORIES
SOUNDCLOUD