In the wake of the domestic violence allegation leveled against Super Eagles and Leicester City forward, Ahmed Musa, President of the Nigeria Football Federation, Amaju Melvin Pinnick and his compatriot, John Ogu have come out swiftly to defend him.

Musa was alleged to have assaulted his wife Jamila with whom he has two kids. This prompted the UK police to invite him for questioning, with the news spreading across Nigeria and UK media.

But, Pinnick who is close to the family has come out to deny that such a thing never happened in the house of the former Kano Pillars winger.

Pinnick spoke through the official twitter handle of the Super Eagles 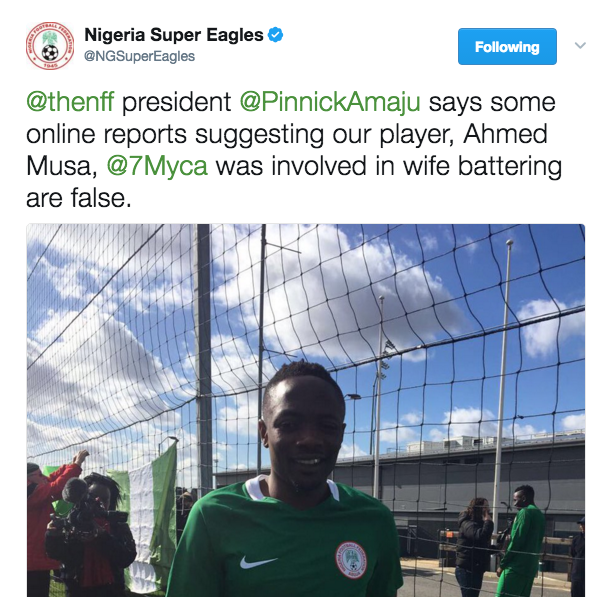 Also adding his voice is Musa’s Super Eagles’ teammate John Ogu has sprang into defending Musa whom he has known for years.

Ogu was gutted about the news on Musa and the Hapoel Beer Sheva midfielder revealed that Musa is in fact one of the most responsible persons he knows. He posted his opinion on his twitter handle @7Myca, where he said:

“Musa is one responsible person I know. Please let us stop spreading false news about people”.

Musa has not been enjoying the best of on field form recently with his club Leicester City and only recently was unhappy with some situation in the national team which had been resolved.