Two second half penalties by Godwin Obaje lifted FC Ifeanyiubah to a dramatic come-from-behind victory over Shooting Stars in a Matchday 19 game of the Nigeria Professional Football League decided on Wednesday.

Visitors Shooting Stars went in front on 21 minutes courtesy of youngster Sunday Faleye who profited from a mistake by Ifeanyiubah defender Olamilekan Aniyikaye. Obaje restored parity just before the hour mark from the penalty spot before he scored again from 12 yards five minutes from time to give his side the victory.

FC Ifeanyiubah were on a five-match unbeaten streak and their Ghanaian coach, Yaw Preko named an unchanged lineup to the side that drew at Lobi Stars on Match Day 18. His opposite number, Fatai Amoo made three changes to his side with former Ifeanyiubah defender Samuel Olabisi captaining the Oluyole Warriors.

The visitors started the brighter of both sides and almost went in front on 13 minutes when Ayobami Junior’s effort off a cross by Bola Lekan came off the cross bar. They were however not to be denied eight minutes later when Ifeanyiubah defender Aniyikaye gave the ball away to Tolulope Olaifa who passed the ball to Faleye. The youngster did much of the work by twisting and turning Aniyikaye before burying his effort into Ikechukwu Ezenwa’s near post.

Stung by that shock lead, the hosts went in search of insistent equalizer but Stars goalkeeper Charles Tambe superbly turned away Pascal Seka’s effort on 23 minutes before Godwin Obaje missed his team’s best chance at the end of the first half when he headed Prince Aggreh’s cross off target from four yards.

Second half
FC Ifeanyiubah expectedly upped the ante in the second half and were handed an opportunity to draw level on 55 minutes when Shooting Stars winger Junior Ayobami fouled Seka while attempting to clear. The dimunitive star got his second booking of the day and was followed by the red card.

Godwin Obaje made no mistake from the spot, finding the bottom left corner and sending Tambe the wrong direction.

Tambe twice denied Godwin Obaje and then pulled off a top drawer save to parry substitute Ifeanyi Onuigbo’s header for a corner. From the ensuing corner, the decisive moment came.
Aniyikaye atoned for his initial error by heading Aggreh’s corner goal wards but the ball bounced onto Olabisi Sanuel’s left arm.

Obaje stepped up once again and sent Tambe the wrong direction to give his side full marks and extend their unbeaten sequence to seven matches. 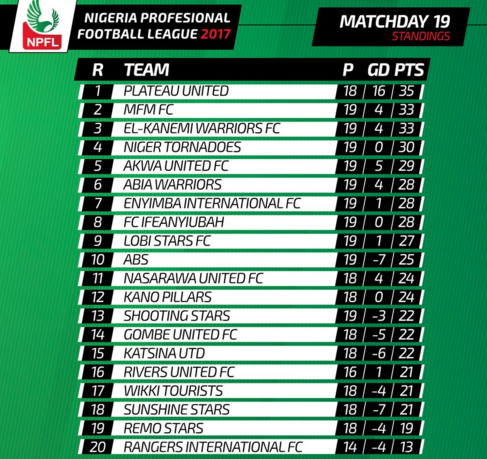 Moses’ Retirement: Four players who can take his position