Former Super Eagles captain Austin ‘Jay Jay’ Okocha and 2005 World Footballer of the Year, Ronaldinho Gaucho were both in Kazan, a city in Russia at the weekend, to inspire football fans and open the FIFA Confederation Cup Fans’ Park in the ancient city, AOIFootball.com reports.

Kazan has been picked as one of the host centres for the FIFA Confederation Cup billed to kick-off on the 17th of June all through to the 2nd of July. 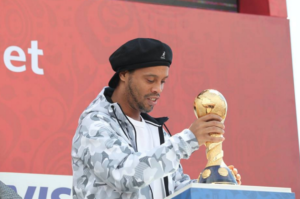 World football governing body, FIFA selected the two football legends who at a time played together at Paris Saint Germain to go sensitise fans and also open a fan-park in Russia’s eighth most populous city.

The Kazan Arena Stadium is the home ground of Russian Premier League side, Rubin Kazan.