With hostilities set to get underway in the second round of the Nigeria Professional Football League matches, stakeholders and pundits themselves are all eager to see how events will unfold.

In some quarters, there are anxiety over teams losing their current positions, while in others are optimistic that once the second round kicks off, their darling teams will will do well.

Here are the groups that will shape the NPFL second round:

The current table toppers are Plateau United and MFM FC of Lagos, closely followed by El-Kanemi Warriors of Maiduguri who are a major surprise.

No one would have believed that these three teams would be at the summit of the league at this point in time.

Plateau United look like they will fight to the end, given the kind of reinforcements they have acquired and also considering the calibre of players they have in the team and the kind of determination and motivation they are working with.

I can’t however guarantee that they would become champions, but a Champions League spot seems to be already guaranteed.

MFM FC on their part, had a very good first round record like they did last season before they were enmeshed in a relegation battle up till the last day that they needed more than 11 players to maintain their topflight status. 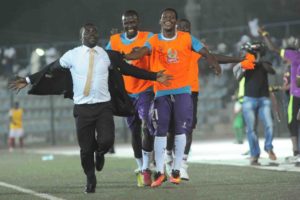 Their rustiness has again started towards the end of first round as they were beaten blue-black by Nasarawa United before going on to lose a few more games.

Fidelis Ilechukwu has more to contend with as some of his key players have been distracted by transfer and trials, but nevertheless, he has to make his boys work hard this second round or they might end up at the middle of the table.

Issa Ladan Bosso and his boys have shown that they have an agenda this season, with the way they played in the first round, teams should dread them.

El- Kanemi just have to be more defensive away, concede less goals and score more at home and then the rest might be history, after all they were thrashed 4-0 last year by Rangers to win the cup; who says they can’t win it this year.

Only Enyimba FC of Aba looks like they know their way back home among the wounded giants as they are 7th on the log with 28 points.

They are 7 points adrift the league summit, closely followed by FC Ifeanyi Ubah but I won’t say they can win the trophy cause this year might be the time for the minors.

It will be interesting to see the kind of fight all these teams will put in and how they will respond in the second round; one will be surprised if any of them rises to become the champion, because it will be like snatching victory at the jaws of defeat. The only thing that is certain is that the table will change  as some of them will find themselves in top 5 while a top ten finish will be like winning the trophy for a few of them.

Many teams who know they have no business being anywhere close to the top will take solace in finishing between 10th and 16th, meaning no league title, no continental ticket and no relegation battle. Expect Niger Tornadoes to finish around the 10th position, as the current 4th position they find themselves will be for a while. Also expect teams like Sunshine Stars, Lobi Stars, ABS and Nasarawa United, if they don’t buckle up to jostle for what is generally referred to as appreciable position in the league.

The battle for survival is always fiercer than the battle for the title as no team wants to be relegated, but sadly, four teams have to go down in this case. In the danger zone currently are:

Remo Stars- They came to the NPFL with scientific football, but after 19 games, the Fatai Osho-tutored side are in a very disadvantaged position going into the second round, and only sheer luck and a miracle will make them survive the drop, as in most cases, rock bottomed teams are always relegated. 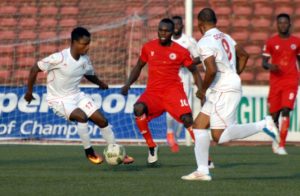 Wikki Tourists- They could be termed a disappointment this season so far, failing both home and away. They managed to win 6, drew 3 and lost a massive 10 games in the first round; who says they won’t lose another ten in the second round because of their lack of consistency? And if they don’t improve early enough, they should prepare for life in the NNL.

Shooting Stars- It has now become a norm for Shooting Stars to be fighting relegation this past few years. I pray that their case will not be like that of Sunderland this year. They have brought in some new legs should blend well so they can kick-start the second stanza on a high.

Gombe United-Another newcomer that is facing the danger of an early return to the NNL, on 23 points and less goal deficits, the Manu Garba-tutored side might still survive the drop, but they should pray not to travel to the home of any wounded giant when they need points the most. If they can garner points in their first 10 games, there is hope for them, but if they start losing and want to wake up in the last 5 games, Ikorodu United will be their case.

Flying Eagles gets Rohr boost ahead of U-20 AFCON