FC Crotone striker, Simeon Tochukwu Nwankwo has said he would welcome the arrival of more Nigerian-born players in the Italian Serie A which is regarded as one of the top five leagues in the World.

Nwankwo, who joined Crotone from Portuguese second division side, Gil Vicente where he scored 29 goals in 88 appearances in three seasons between 2013 and 2016, believes the presence of Nigerian players in Italy would be a good feeling. 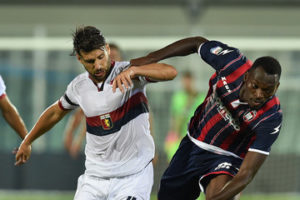 Nwankwo seem to be the most talked about Nigerian in Italy especially in his first season in the league, with U17 World Cup sensation Okonkwo Orji playing a cameo role for Bologna last season featuring in nine games, Joel Obi of Torino plagued by injuries though featured for well over 700 minutes last season and Sadiq Umar who was loaned out by Roma to Bologna last season where he featured in seven games.

On his readiness if given a chance in the Super Eagles, Nwankwo posited that he is ready whenever he is called upon, adding that he would continue to focus on his game and hope for the best.

Nwankwo scored 3 goals for his modest side and worked hard to ensure the team maintain its Serie A status last season.