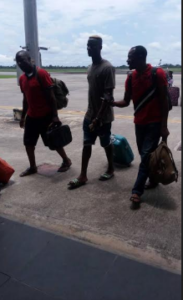 Alampasu embarked on a journey from the Dana Air Flight in Lagos which took him to the Akwa Ibom State capital. The Dana Air plane touched down at the Akwa Ibom Airport at 12:10 hours local time.

Alampasu is one of the three goalkeepers named in the Super Eagles 24-man roster against Cameroon.