Super Eagles’ rave of the moment and Chelsea FC wing-back, Victor Moses, has said that he feels honoured anytime he plays for Nigeria.

Moses, who spoke exclusively with AOIFootball.com, revealed that it’s always a thing of joy and honour to represent the nation any time he is called up to do so.

The Lagos-born attacker, who helped the Super Eagles get closer to a sixth World Cup appearance against African champions Cameroon in Uyo and Yaoundé, said:

“I am always happy, honoured and delighted to wear the Nigerian shirt. The Green-White-Green it’s obviously a big shirt to put on and I’m proud to wear it anytime.”

He further added: “It’s really a big shirt, I must say, considering the likes of Jay Jay Okocha, Nwankwo Kanu and the late Rashidi Yekini wore it. With what these legends have done for the team, you just have to give your best while wearing the shirt and always come out to give your best in every game.” 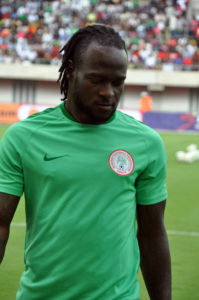 Moses, who played for the England youth teams between 2005 and 2010 before switching allegiance to Nigeria in 2012, has a knack for scoring crucial goals in World Cup qualifiers for the Eagles also gave his opinion on featuring for the Eagles at the world cup in Russia next year.

He said: “It’s every player’s dream to play at the World Cup; when you retire, you will want to look back on what you have done.”

“I went to the World Cup in 2014 with a bit of injury, which could not let me perform to my best, so I and my teammates will do everything within our reach to ensure Nigeria is  represented in Russia next year.

“When we qualify, I need to go back and do my best and hopefully, we can achieve something no other team has done before on the continent,” Moses added.

Moses has scored 10 goals for Nigeria in 29 appearances, with 5 of those goals coming in World Cup qualifying matches.