By Clement Nwankpa Jr
Was it a case of saving the best for the last or tactical ingenuity? Whatever it was, Tornadoes coach Abubakar Bala would beat his chest and scream “it worked!”
It takes some magical touch for a team to trail 0-2 by the 60th minute and still win 4-2. That sums up the Aiteo Cup first leg tie that saw Niger Tornadoes beat FC IfeanyiUba 4-2 at Confluence Stadium, Lokoja.
Many at the arena would agree the result was a true reflection of the flow as Tornadoes deserved to win but how could a team be so dominant and still be two goals down?
The stats and the scoreboard disagreed for the larger part of the game. Tornadoes was on the front foot from the first blast of the whistle and by half time, had nine corner kicks while the visitors had none.
By the half time, Tornadoes had five attempts all off target but it was FCIU’s only attempt that counted. In the 6th minute, King Osanga capitalised on a mixup in Tornadoes defense to tee on Patrick Ikeokwu who tapped in.
Bala noted the urgency and responded with two quick changes in the 30th and 32nd minutes. Rabiu Sani came in for Ebenezer Odeyemi while Yakubu Auta gave way for Peter Momoh.
The duo linked up with Babawo Ibrahim and kept FCIU further on the back foot. But in the 51st minute, Godwin Obaje threatened Tornadoes on the counter only to be fouled by Sunday Akinmolodun who bagged a yellow in the process.
A minute later, King Osanga curled in the resultant free-kick from 25 yards. That was FCIU’s second attempt all evening but they led 2-0.
Meanwhile, Ibrahim, Sani and Momoh had other ideas.
The Tornadoes fight back started when Sani struck in the 61st minute. Within two minutes, they were level thanks to Ibrahim.
Sani got his brace in the 71st minute before Momoh’s 20 yard canon slipped off keeper Bamba Drissa’s hands to give Tornadoes a two goal cushion going into the return leg in Nnewi.
Ironically, coach Bala, who could pass for the unofficial man of the match for his prompt intervention from the bench was given the marching orders in the 90th minute for dissent. 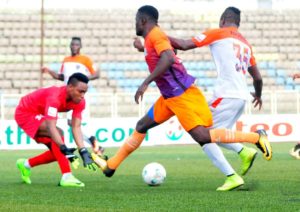 The only goal of the game was scored by Ajibola Otegbeye in the 33rd minute.

The second legs come up on Wednesday in Anambra and Uyo.

In the Aiteo Cup Women’s semi final, Bayelsa Queens  threw away a 2-0 lead as Rivers Angels came back to end game as 2-2.

Ibom Angels Vs Confluence Queens did not hold as Abia Angels appealed their disqualification and the AITEO Cup Organizing Committee will meet and take a decision on this matter on Tuesday, 3rd October 2017.