Assistant Coach of the Super Eagles, Salisu Yusuf, has expressed confidence in the ability of the Super Eagles to fly past their Zambia opponents when they face them at the Godswill Akpabio International Stadium in Uyo on Saturday.

Salisu, who spoke with AOIFootball.com in Abuja where some of the players and officials are camped ahead of their departure to Uyo on Monday evening, said he knows the match will be a very tough one but the Super Eagles are clearly up to the task of carrying the day.

“We want to win but it’s going to be a very difficult match for the Eagles but I am very confident we will win. 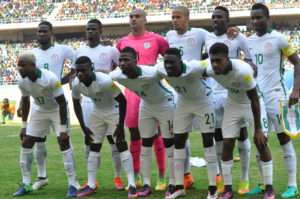 “It’s going to be a tough game because the Zambians had fantastic results coming into this game as they beat Algeria back-to-back. Their confidence is definitely high.

“The Super Eagles are well motivated because everybody wants to play at the World Cup. We need to work very hard to beat them and I am optimistic and confident we can do it,” Salisu said.

He further posited that the Zambians might have been in camp early but the Nigerian team has more experience going into the encounter.

“Being in camp early can only offer the Zambians cohesion because they play with mostly home-based players, but the Eagles have one thing standing out for them which is intelligence and maturity in the squad; so, we are well on course for victory,” Salisu concluded.

Alhassan scores as Austria Wien crashes out of OFB Cup