It was a football frenzy at the ancient town of Arochukwu in Abia State when Team Amuvi defeated Team Amangwu 3-2 on penalties in the final after goalless 90 minutes to win the maiden edition of  Maxi Ike Okoronkwo Peace Cup on  Easter Sunday.

Speaking in Arochukwu, Mazi Victor Ike Okoronkwo, the master think tank behind the tournament, expressed his satisfaction with the football artistry displayed by both teams in the thrilling encounter. He affirmed that the plan is to form a football club to be called Arochukwu  United. He noted that talents that were on parade throughout the course of the tournament that began in February prompted him to want to establish the football club. 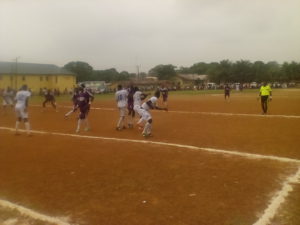 “This is the first edition of the tournament which began in February and 16 villages registered out of 19 villages that made up Arochukwu kingdom. It has been electrifying from the beginning and we all saw the crescendo at the final. It was very entertaining despite the game being decided through penalties, ” Mazi Okoronkwo said.

“Well, the ultimate plan is to try and get a united team from Arochukwu out of the tournament and be able to position the team and the boys to have a chance at the Nigerian league and possible from there go international,” he added.

He also said that he was motivated to organize the grassroots football tournament in Arochukwu in order to fight crimes and reduce youth restiveness and other social vices in the community.

“The driving motivation was to try and keep the youth out of crime. The youth restiveness is beginning to increase in the community and there had been issues of banditry and drug-related activities and if you keenly observed, you will discover that most of the youths had nothing to do.

“They have a lot of talents and unless you provide the opportunity like this and encourage them, they may not be able to showcase or realize their talents. So, God willing, we hope to set up a team that will begin to feature within Abia state, within the country and possibly where God will lead us to, ” Okoronkwo said.

Mazi Okoronkwo also revealed that the kingdom of Arochukwu has produced talented footballers that got to the summit of their career by playing for the national team in the past, including his elder brother,  Stanley Okoronkwo, who played for the then Green Eagles in the early 80’s.

“Quite a number of notable players in Nigeria have come out of Arochukwu and some of them were discovered through grassroots football tournament like this. Nwankwo Kanu, Bethel Orji, Stanley Okoronkwo (my elder brother), Solomon Okoronkwo are all from Arochukwu and they have played for the national team in the past,” he said.

Big blow as Argentina goalie, Sergio Romero is ruled out of World Cup