It was a relatively good weekend for World Cup hopefuls in the Super Eagles, as Captain John Mikel Obi scored his first league goal, while Fanendo Adi also got on the score sheet as he tries to force his way into the Eagles’ 35-man squad.

There was a goal also for Super Falcons’ attacker, Francisca Ordega who was on target in the USA.

AOIFootball.com takes you through their performances, with plenty to smile for young stars Hillary Gong and Chidera Ejuke who have continued to show consistency in front of goal.

Wilfred Ndidi and Kelechi Iheanacho: Ihenacho was introduced at half time for Shinji Okazaki and helped setup Jamie Vardy to score Leicester City’s only goal as they fell 2-1 to Burnley.

Wilfred Ndidi missed the game due to suspension.

Victor Moses: The Eagles’ winger saw just four minutes of action when the Blues came from two goals down to beat Southampton 2-3 at St. Mary’s.

Alex Iwobi: The Eagles’ attacker saw 86 minutes of action in the Gunner’s 2-1 loss to Newcastle.

Ola Aina: He was in action for all 90 minutes as Hull City lost 1-0 at home to Sheffield Wednesday.

Yusuf Otubanjo: The winger was on target for Altach as he drew them level in their 2-1 comeback win over Wolfsburger AC.

Abdul Ajagun: He was on target for Kortrijk as they beat Lierse SK 2-0 away from home.

The goal was Ajagun’s 5th goal of the season.

Uche Agbo, Moses Simon, Samuel Kalu and Anderson Esiti: All four Nigerians were on parade when Standard Liege hosted Gent in the third round of the Championship Playoffs in Belgium. A 90th minute penalty from Renaud Emond gave Liege a slim 1-0 win.

Peter Olayinka: The Nigerian attacker was on for the entire match duration when Zulte Waregem thrashed Royal Excel Mouscron 5-1, with Taiwo Awoniyi missing the game through injury.

Chuba Akpom and Joseph Akpala: Both players started for their respective teams as KV Oostende played out a 2-2 draw against Sint-Truidense. Akpom was on for the entire match duration while Akpala was withdrawn five minutes from regulation time.

Musa Muhammed and Stephen Eze: Both players were on from start to finish as Lokomotiv Plovdiv pipped Etar Veliko Tarnovo 1-0 in the Bulgaria Parva Liga.

Mikel Obi: The Eagles’ skipper scored his first goal of the season that helped Tianjin Teda recover from a goal down to win by 2-1, thus earning their first win of the season against Guangzou R&F.

Odion Ighalo: He was in action for all 90 minutes and he helped Changchun Yatai to their first three points of the season in their 3-0 thumping of Henan Guoan.

John Owoeri: The former junior international scored his second goal of the season for Shanghai Shenxin in their 3-2 victory over Meixian Techand in the second tier league in China.

Chidozie Awaziem: The defender was introduced just after the half hour mark for Diego Carlos who sustained an injury as Nantes drew 1-1 at home to Dijon.

Victor Osimhen: The young striker saw only 10 minutes of action in Wolfsburg’s goalless draw at home to Augsburg. German-born Nigerian Felix Udoka was sent off after two bookable offenses for the host.

Sadiq Umar:  The Nigerian attacker was in action for the entire match duration as NAC Breda lost 2-1 at home to Willem II.

Fred Friday: The young star came off the bench at half time but could not inspire his side to victory as Sparta Rotterdam lost 7-0 away at Vitesse.

Joel Obi: The Super Eagles returnee was on the bench for all 90 minutes as Torino drew goalless away at Chievo Verona.

John Ogu and Anthony Nwakaeme: Eagles’ midfielder John Ogu scored his third goal of the season in Hapoel Be’er Sheva’s 2-2 draw at home to Hapoel Haifa. Nwakaeme was introduced at half time for Isaac Cuenca as he made his return from injury.

David Babajide and Anthony Ideki: Babajide was on for an hour while Ideki was introduced with 20 minutes left, but both players were unable to stop Haugesund from losing 4-2 away at Ranheim IL.

Chidera Ejuke and Afeez Aremu: 19-year-old Nigerian striker, Chidera Ejuke was in fantastic form for Valerenga, as he scored one and setup another in their 6-1 mauling of IK Start away from home.

Afeez Aremu was introduced at half time for the hosts but he could do little to stop his side from losing.

Ahmed Musa and Sylvester Igboun: Musa put aside last Thursday’s Europa League exit to score his first league goal since joining CSKA in the winter in their 1-1 draw against UFA.

Both Musa and Igboun were on for the entire match duration.

Aaron Samuel, Brian Idowu and Fegor Ogude: All three Nigerians were on from start to finish but could not stop Amkar Perm from going down 3-0 at home to Rubin Kazan.

Hillary and Azango were on from start to finish while Rabiu was withdrawn at half time. 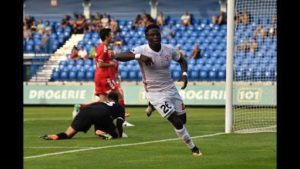 Oghenekaro Etebo and Imoh Eziekel: Both Nigerians started for Las Palmas but were unable to help the LaLiga strugglers as they fell 1-0 at home to Real Sociedad. 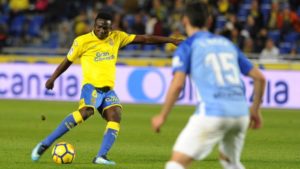 Brown Ideye and Isaac Success: Ideye returned to the starting lineup but was unable to stop Malaga from going down 1-2 at home to Real Madrid.

Ideye was replaced after 78 minutes while Success was not listed for the encounter.

Chima Akas and Gbenga Arokoyo: Akas started his third consecutive game for Kalmar, while Arokoyo was introduced on the hour mark as they could not stop their team from losing 3-1 away at IFK Norrkoping.

Stephen Odey: The former MFM striker was on for just 10 minutes when FC Zurich lost 1-0 away at Young Boys.

Kenneth Omeruo and Samuel Eduok: Omeruo put in a fantastic performance and helped Kasimpasa to their third straight clean sheet as they beat Karabukspor 2-0. 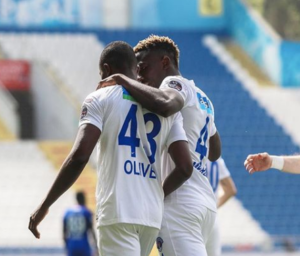 William Troost Ekong, Mikel Agu, and Abdullahi Shehu: Agu and Abdullahi were both on from start to finish while compatriot Troost-Ekong was only good for the bench as Bursaspor suffered yet another defeat in their 2-1 loss away at Goztepe.

Fanendo Adi: The former Eagles’ invitee scored his first goal of the season for Portland Timbers as they got their first win of the season in their 3-2 victory over Minnesota United. 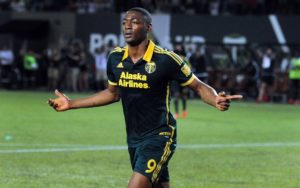 Francisca Ordega: The Super Falcons’ attacker scored her first goal of the season for Washington Spirit in their 2-4 loss at home to North Carolina Courage.