With the World Cup less than 50 days away and time running out on Super Eagles’ gaffer, Gernot Rohr to name capable backups for current first-choice striker, Odion Ighalo, AOIFootball.com takes a look at five possible attackers who could lay a stake in Nigeria’s prestigious 35-man provisional list.

The Franco-German has in the past tried the likes of Kelechi Iheanacho and Alex Iwobi in the supporting striker role, with both players not particularly filling the position. One begins to ponder if giving the likes of Brown Ideye and Henry Onyekuru a chance might be a good choice going into the World Cup.

BROWN IDEYE: The 2013 AFCON winner needs no introduction to both the coach and Nigerians as he was a force to reckon with when Nigeria won the Africa Cup of Nations (AFCON) in 2013. He provided great support for then striker, Emmanuel Emenike.

Ideye started as the lead attacker in the Eagles’ first World Cup qualifier away to Zambia in Ndola and was involved in the buildup to Iheanacho’s goal after holding up play for the Leicester City forward to double Nigeria’s lead.

He however fell out of the team after his move to China became a nightmare as he fell out with the coach, a situation that led him off the national team. However, a return to Malaga last January may now force his way into the Eagles’ provisional squad.

HENRY ONYEKURU: The 20-year-old attacker needs no introduction as he has shown a great level of consistency over the last three years, notching up 37 league goals in 79 first team appearances, making him the country’s best finisher at that age in Europe. 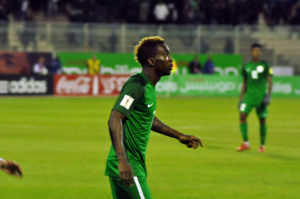 Onyekuru made his debut for Nigeria in a friendly match against Togo last year and featured in Nigeria’s dead rubber qualifier against Algeria last November. However, a knee ligament injury last December almost cut short his season.

The striker has however returned to full training for Anderlecht and his in contention for their next league clash at the weekend. If fully fit, Rohr could add the youthful attacker to his firing arsenal in Russia.

SIMY NWANKWO: The Crotone attacker was obviously not on the radar of the national team handlers, but consistent performances over the last few weeks for Crotone in the Serie A has suddenly sprung up a little hope for the attacker.

Four goals in 6 league starts is definitely not a bad one for the 24-year-old, but having changed the fate of the Serie A title with a stunning goal against Juventus last week, which was followed by another fantastic strike against Udinese on Sunday, he helped his side off the relegation zone.

Simy could maybe be a surprise inclusion to the team.

FANENDO ADI: The former Super Eagles’ invitee has been making a case for himself to be considered for national team call-up. Invited for the game against Egypt four years ago, Adi has not found favour with recent national team managers.

Compared to US-based Bright Dike, who was almost a sure candidate for the world cup in 2014, Adi has been directly involved in four goals in his last five matches (2 goals, 2 assists). His physical strength could be of help to the national team in bullying and harassing opposition defenders.

ANTHONY NWAKAEME: The Hapoel Be’er Sheva front-man did little to lay claim to the national team when he was given the chance against Algeria last November, with Rohr not impressed with his overall display.

An injury however ruled him out of the Eagles’ last fixtures against Poland and Serbia. However, the attacker returned with a bang over the weekend as he scored a brace for Be’er Sheva and edge closer to yet another league title.

If selected for the DR Congo match, Nwakaeme must bring his goal-scoring form from club level into the national team. Added to these five players is NPFL goal king, Junior Lokosa, who also has an outside chance, whilst the likes of Kayode Olarenwaju and Junior Ajayi cannot be completely overlooked as Nigeria searches for the best to bring glory in Russia.

Falconets depart for Benin ahead of Tanzania clash