2nd vice-president of the Nigeria Football Federation (NFF), Shehu Dikko, has hailed the current crop of Super Eagles’ players as the best the nation has assembled in recent years, AOIFootball.com reports.

Dikko, who also doubles as the Chairman of the League Management Company (LMC), made this assertion to Canada-based Nigerian journalist, Wale Ajayi, whilst updating on the team’s training and preparation for the World Cup which kicks off in a few days.

“Everything is good and everyone is shaping up very well. I must say this is the best set of players we have seen in a long time.

“There are no worries as everyone is focused on the assignment at hand with togetherness. 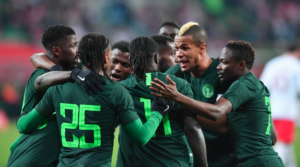 “Presently, the training is focusing on how to ensure that the players attain top shape and full fitness. The team is excited with the quality of facilities as well as the serenity of the campsite which has helped limit any form of distraction in preparation for the World Cup,” Dikko said.

A member of the CAF Inter-Club Committee, Dikko said further that the Eagles’ backroom staff who missed the initial trip to Austria would join the rest of the team latest Tuesday.

“The backroom staff members are still in London but have made submissions yesterday (on Monday) to the Austrian Embassy in London, with the intervention of the Nigerian High Commission. Hopefully, their visas would be issued today (Tuesday) and they will join the team later in Austria same day.

“On the game against the Czech Republic, I will not want to speak on the formation or style Rohr would prefer to exhibit against them because that is under his jurisdiction.

“But, as far as I know, I think we have the talents to achieve what is desire,” Dikko concluded.