AOIFootball.com has gathered that Super Eagles’ Captain, John Obi Mikel showed resilience and commitment in his leadership of the team, as the midfielder played with a heavy heart after learning few hours to their final clash against Argentina, that his father had been kidnapped.

The Tianjin Teda star, who also played with a sprained wrist, showed no signs of weakness, leading the team gallantly and effortlessly in the Super Eagles’ unlucky ouster. Watching him play deeply in that game, no one could have known that Mikel had teary eyes for his dear dad.

Narrating his ordeal to a close associate, Mikel was quoted as saying: “Four hours before kickoff, I received a call from Nigeria that my father Pa Michael Obi had been kidnapped for the second time. He was on his way to a funeral in south-eastern Nigeria from Jos when he was abducted along the Makurdi-Enugu Expressway.

“I was emotionally distraught but had to make a decision about whether I was mentally ready to play the game. I was confused. I did not know what to do, but in the end I knew that I could not let 180 million Nigerians down, I had to shut it out of my head and go and represent my country first.” 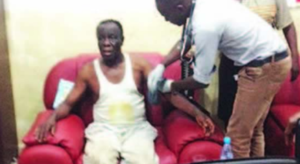 Despite criticisms by some sections of the media, Mikel’s showed his determination to lead Nigeria to glory once again by personally hiring a trainer before the world cup to keep him in top shape.

It would be recalled that in 2016, the Eagles’ captain rallied the then Olympic team not to give up on the country despite arriving just hours before their first match against Japan as they eventually went on to pick Nigeria’s only medal at the tournament in Brazil.

Despite Nigeria bowing out of the World Cup at the group stage, one cannot easily forget the manner in which Mikel led the team in Russia as there were no negative issues emanating from the camp.

However, with cheering news of his father’s release by the abductors, there is no doubt that Mikel Obi remains committed and dedicated to the Super Eagles and could yet lead the nation to another AFCON glory come 2019 in Cameroon.