Kelechi Iheanacho rounded off his preseason preparations in grand style, scoring a brace for Leicester City, whilst Odion Ighalo continued to prove critics wrong by scoring again in China. There was also a goal for former Eagles’ left-back, Taiye Taiwo in Finland.

AOIFootball.com brings you a review of their performances as the 2018/2019 European football season gathers momentum.

Victor Moses: The Eagles’ winger came in for Pedro with 11 minutes of normal time left but could offer no help as Chelsea lost 2-0 to Manchester City in the English Community Shield.

Alex Iwobi: The Gunners attacker was on for an hour when Arsenal rounded off their pre-season tour with a 2-0 win over Italian club, Lazio.

Kelechi Iheanacho and Wilfred Ndidi: Iheanacho continued his fine form in preseason as he bagged a brace for the Foxes in their 2-1 win over Lille. Wilfred Ndidi also featured in the match.

Oghenekaro Etebo: The Eagles’ player made his debut for Stoke City but was later withdrawn after the hour mark in their 3-1 loss to Leeds United.

Abdul Ajagun: The former Flying Eagles star was on for 74 minutes before being replaced by Elohim Rolland as KV Kortrijk earned their first point of the season in a goalless draw away at Royal Antwerp.

Emmanuel Dennis: The attacker saw just 12 minutes of action for Club Brugge as they defeated Royal Excel Mouscron by a lone goal.

Taiwo Awoniyi, Anderson Esiti and Kingsley Madu: Awoniyi made his first start of the season for KAA Gent as they drew 1-1 at home SV Zulte Waregem. Anderson Esiti was on the bench and it was the same for Kingsley Madu who was confined to the bench for the away side for the entire match duration.

Moses Simon and Samuel Kalu were both missing as both players continue to be linked with a move away from the club.

Uche Agbo: The midfielder was on for the entire match duration as Standard Liege forced Waasland Beveren to a 1-1 draw.

Stephen Eze: The lanky defender was in action for the entire match duration as he helped Lokomotiv Plovdiv to their first three points of the season. They beat Ludogorets Razgrad 1-0. 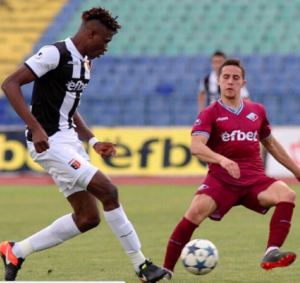 Odion Ighalo: The in-form striker scored his 12th league goal of the campaign as Changchun Yatai were forced to a 1-1 draw at home by Shanghai Shenhua.

Mikel Obi: The Eagles’ captain was missing in action again when Tianjin Teda beat Hebei China Fortune 2-1 away from home.

Eziekel Henty: The striker made it two in two when he scored what proved to be the winner for NK Osijek as they defeated Nk Rudes 3-2.

Peter Olayinka: The former Gent man had a memorable debut as he came off the bench to score his first goal for Slavia Praha in their 3-1 defeat to SFC Opava.

Paul Onuachu and Frank Onyeka: Onuachu was not listed whilst Onyeka saw just 20 minutes of action when FC Midtjylland put asideWednesday’s UEFA exit to record a convincing 3-1 win away at Vejle Boldklub.

Taye Taiwo, Marcauley Chrisantus and Faith Friday: Former Eagles’ left-back Taiye Taiwo was on target for his Finnish side, PoPs Rovaniemi when they drew 2-2 away at HJK Helsinki who had both Friday and Chrisantus on parade.

David Babajide and Anthony Ikedi: Babajide was on for the entire match duration whilst Ikedi was introduced with four minutes of normal time left as they Haugesund to a 2-1 victory away at Tromso IL.

Matthew Ifeanyi: The midfielder was in action for the entire match duration, picking up a yellow card in the process when his side Lillestrom SK drew 2-2 at home to Molde FK.

Uche Ikpeazu: The 23-year-old striker was on for 78 minutes as Heart of Midlothain thrashed Hamilton 4-1 away from home.

Umar Sadiq: The on-loan Roma forward was only good for the substitute bench as 10-man Rangers forced Aberdeen to a 1-1 draw.

Efe Ambrose: The former Eagles’ defender was on for the entire match duration as Hibernian thrashed Motherwell 3-0.

Philip Azango, Emeka Umeh and Abdul Musa Zubairu: It was a dream debut for 18-year-old Emeka Umeh who scored his first goal for the club whilst Azango also got an assist as AS Trencin thrashed SKF Sered 5-1. Zubairu Musa also featured in the encounter.

Chima Akas:  The Eagles’ left-back was in impressive form as he helped Kalmar FF return to winning ways with a hard fought 2-1 win over IFK Goteborg.

Akas who was on for the entire match duration had a game rating of 7.6.

Stephen Odey: The former MFM striker was introduced at half time but could do little to help FC Zurich as they were pummeled 4-0 by Young Boys.

Noah Okafor: The youngster was introduced after 78 minutes as his club Basel whipped Grasshopper Club Zurich 4-2.

Blessing Chibuike Eleke: The striker scored on his debut to help FC Luzern to a 4-2 win over FC Lugano at the weekend.

Henry Onyekuru: The Eagles’ attacker was confined to the bench for the entire match duration when Galatasaray lost the Turkish Super Cup on penalties to Akhisarspor after regulation time had ended 1-1.

Pillars Management to may name new coach on Friday