Super Eagles’ forward, Henry Onyekuru is elated after being handed a call-up for Nigeria’s upcoming game away at Seychelles, saying that he was happy to return to the Eagles’ fold, AOIFootball.com reports. 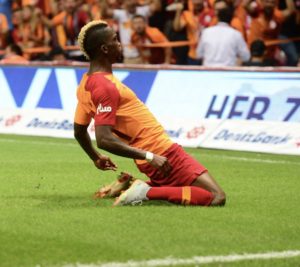 The 21-year-old attacker, who has been in form with new club Galatasaray, told AOIFootball.com after the list was announced earlier on Friday, that he will give his best if handed an opportunity to impress on the pitch.

“First, I’m extremely happy to be back with the national team and I’m ready to give my best on and off the pitch of play.

“I know how important this clash is to the country following our loss to South Africa last year; hopeful, we won’t disappoint Nigerians when we square up against Seychelles next month,” Onyekuru said.

The Galatasaray striker last featured for the Super Eagles in their 1-1 draw against Algeria last November, subsequently missing out on Nigeria’s World Cup party in Russia due to injury.