It was a pretty impressive weekend for Nigerian players across the globe with Blessing Eleke scoring a brace, whilst debut goals were also recorded for Samuel Kalu and Akinyemi Akinola. In-form Super Eagles’ striker, Odion Igahlo also continued to soar in the Chinese Super League, scoring his 17th goal of the campaign.

AOIFootball.com reviews their performances across the footballing globe.

Victor Moses: He was not listed for the Chelsea as they recovered from an early goal to thrash Cardiff City 4-1 in the English Premier League.

Alex Iwobi: The Eagles’ forward was also not listed when Arsenal beat Newcastle 2-1 away.

Kelechi Iheanacho and Wilfred Ndidi: Iheanacho came off the bench to bag an assist for Leicester City, while Ndidi was on for the entire match duration as they lost 4-2 away to Bournemouth.

Isaac Success: He came off the bench in the closing stages for Craig Cathcart as Watford surrendered their unbeaten start to the season, losing 2-1 at home to Manchester United.

Eberechi Eze: The youngster scored what proved to be the winner for QPR in their 2-1 win away at Bolton which had Sammy Ameobi before being withdrawn through injury.

Oghenekharo Etebo: He was on for 84 minutes, combining well with Biram Diouf to set up Afobe for the first goal as Stoke surrendered a two-goal lead to draw 2-2 away at Sheffield Wednesday.

Semi Ajayi: The Eagles’ defender put up an amazing display to help his side claim a 1-0 victory over Derby County. He had a game rating of 8.0.

Yusuf Odubanjo: He scored one and assisted another in Lask Linz 3-1 win over Mattersburg.

Bolaji Simeon: The former Rivers United player saw 70 minutes of action for Guinean side Horoya in their goalless draw at home to Al-Ahly in the first leg of the CAF Champions League quarterfinals.

Michael Babatunde:  The 2014 World Cup star saw 60 minutes of action for Wydad Athletic in their slim 1-0 loss away to ES Setif, while his compatriot Gabriel Okechukwu remains cup-tied.

Ibukun Akinfenwa, Razak Adegbite, and Kehinde Anifowoshe: Both Ibuku and Adegbite were in action for Angolan side Primeiro de Agosto in their goalless draw at home to TP Mazembe. Anifowoshe was confined to the bench.

Abdul Ajagun and Imoh Eziekel: Eziekel was on for 58 minutes while Ajagun was introduced after the hour mark but they both could not help KV Kortrijk from losing 1-0 away at Mouscron.

Victor Osimhen and Uche Agbo: Osimhen saw 25 minutes of action for Sporting Charleroi in their goalless draw away to Uche Agbo’s Standard Liege with Agbo confined to the bench for the entire match duration.

Stephen Eze: The lanky defender was in action for the entire match duration when Lokomotiv Plovdiv defeated Levsski Sofia 1-0.

Odion Ighalo: He scored his 17th league goal of the season and had another goal wrongly ruled out, leading Changchun Yatai to a comfortable 3-0 win over Guizhou Hengfang at the weekend.

Mikel Obi: He was on for the entire match duration but could not prevent his side Tianjin Teda from being battered 5-2 by Shanghai SIPG.

Eziekel Henty: He was on for 75 minutes before being replaced as NK Osijek continued their unbeaten start to the season, drawing 1-1 away at HNK Rijeka.

Musa Muhammed: He was introduced in the final fifteen minutes but could not stop HNK Gorica from losing 1-0 at home to Dinamo Zagreb.

Ubong Ekpai: He was on for 71 minutes for Viktoria Plzen in their 1-0 win at home to SFC Opava.

Paul Onuachu and Frank Onyeka: Onuachu scored his 2nd goal of the season and his side’s second of the match in their 3-1 triumph over FC Kobenhavn with Frank Onyeka playing 71 minutes.

Samuel Kalu: He scored his first goal for Bordeaux in their 3-3 draw at home to Nimes Olympique.

Anthony Ujah: He made it two goals in two matches, coming off the bench to equalise for Mainz in their 2-1 comeback win over Augsburg. 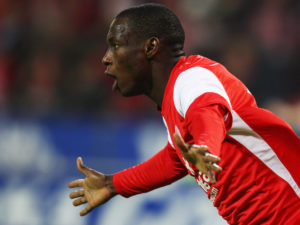 Jamilu Collins: He was on for the entire match duration for SC Pederborn in their 5-3 bashing of FC Koln.

William Troost-Ekong and Ola Aina: Ekong was on for the entire match duration for Udinese, while Ola Aina was introduced with 25 minutes left for Torino as both teams shared the spoils, 1-1.

Orji Okonkwo: He started his first Serie A game of the season for Bologna, playing all 90 minutes in their 1-0 loss away at Genoa.

Joel Obi: The midfielder was on for 46 minutes as ChievoVerona recovered from two goals down to force AS Roma to a 2-2 draw.

John Ogu: The Eagles’ midfielder was on for their entire match duration and picked up a yellow card in Be’er Sheva’s 1-0 loss away to Ashdod SC.

Afeez Aremu and Adeleke Akinyemi: Akinyemi scored his first goal for IK Start while Aremu was the provider of the goal with both players enjoying a 3-0 victory over Lillestrom.

Chidera Ejuke: He helped set up the first goal for Sam Johnson but could not help Valerenga to all three points as they lost 2-3 at home to Rosenborg BK.

David Babajide and Anthony Ikedi: Babajide was on for the entire 90 minutes while Ikedi was confined to the bench as they both suffered defeat with Haugesund, losing 3-1 at home to SK Brann.

Mikel Agu and Alhassan Ibrahim: Mikel Agu made his debut for Vitoria Setubal, featuring for all 90 minutes, whilst Alhassan was on for the entire duration for CD National in their 3-3 draw at home to Setubal in the Taca da Liga.

Junior Pius and Sodiq Fatai: Both players were on for the entire 90 minutes in Pacos de Ferreira’s goalless draw at home to CD Aves.

Sylvester Igboun: He was rooted to the bench when FK Ufa lost 3-0 at home to CSKA Moscow.

Bryan Idowu: The Eagles’ left-back was also rooted to the bench in Lokomotiv Moscow 1-1 draw at home to Dynamo Moscow.

Ahmed Musa: He was on for the entire 90 minutes as Al-Nassr defeated Al-Faisaly 2-1 to maintain their perfect start to the season.

Stephen Odey: He was on target for FC Zurich in the Cup match as they defeated FC Breitenrain 4-2.

Blessing Chibuike Eleke: The striker scored twice and also netted the winning penalty for FC Luzern as they defeated Servette 5-4 on penalties after extra time ended 3-3.

Kenneth Omeruo: The Eagles’ defender continued to await his league debut for Leganes as he was confined to the bench for all 90 minutes in their 1-0 loss at home to Villarreal.

Francis Uzoho: He was confined to the bench in Elche’s 1-1 draw at home to RCD Mallorca.

Henry Onyekuru: He came on for the final 10 minutes and had a goal ruled out for offside in Galatasary 4-1 thrashing of Kasimpasa.

Staff Reporter - May 6, 2017
ALL CATEGORIES
SOUNDCLOUD