Super Eagles’ forward, Isaac Success has been named in Premier League’s Team of the Week for Match Day 10 by whoscored.com, after helping Watford to a 3-0 win over Huddersfield last weekend, AOIFootball.com reports. 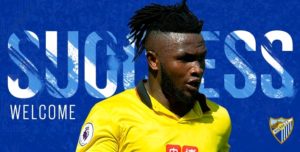 Success, who started his second successive league game, scored his first goal of the season to complete a resounding victory for the host as they maintained their stronghold on the 7th position of the EPL table.
The former Granada of Spain player was on for 83 minutes before being replaced. He had a game rating of 8.3, completed 69% of his passes, made 3 key passes, won 10 of his 20 duels contested and also 100% of his tackles.
Full Team:
Ben Forster – Kiko Femenia, F. Balbuena, J. Stephens, Ryan Bertrand – David Brook, Gerrard Deloufeu, Ross Barkley, Willian, Isaac Success and Mohammed Sallah.