Home African Football AFCON Qualifier: Eagles can beat S/Africa, confident Ola Aina declares
SHARE
Facebook
Twitter
Super Eagles’ defender, Ola Aina is confident ahead of this month’s all-important clash against the Bafana Bafana of South Africa, positing the team is well on course to ensure Nigeria returns to the bi-annual continental showpiece, AOIFootball.com reports.
The Torino of Italy full-back, who spoke exclusively to AOIFootball.com, further revealed that he living his dreaming of playing for Nigeria.
“We just have to work hard ahead of the game against South Africa, play good football, fight for each other on the pitch and hope for a bit of good fortune because it’s needed sometimes when playing in games like this. 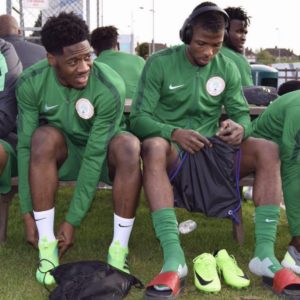 “It’s an honour to play for my country. Playing in the national team makes me feel at home and I cherish every moment I’m been invited to the team,” Aina added.
The Chelsea loanee further thanked his fans and well-wishers for their continuous support towards him even as he continues to improve on his game.
“All I would say is thank you for the continued support. I am not the finished article yet, I’m still improving and learning so bear with me. What I can say for now is thank you and I appreciate everyone,” Aina concluded.
Putting behind his disappointing World Cup exclusion, the versatile defender has gone on to feature in all but one league game for Torino this season, starting in six of those games and also bagging one man of the match award.
He also featured in Nigeria’s back-to-back wins over Libya last month, edging the Eagles closer to their first AFCON tournament in five years, after missing out on both the 2015 and 2017 editions.