Ahead of Saturday’s crucial 2019 AFCON qualifiers against the Bafana Bafana of South Africa in Johannesburg, AOIFootball.com takes a look at how the invited players fared over the weekend.

Daniel Akpeyi: He kept his third clean sheet of the season to help Chippa United earn a point in their goalless draw away at Kaizer Chiefs.

Ikechukwu Ezenwa: The Enyimba shot-stopper has been inactive for a while and with the Nigeria Professional Football League season-ending already, he has been playing second fiddle in the CAF Confederations Cup.

Theophilus Afelokhai: The Enyimba goalie was also not in action last weekend and last played a game last month when Enyimba crashed out of the Confederations Cup.

William Troost-Ekong: He was named in the Serie A Team of the Week after an impressive performance for Udinese in their 2-1 loss to Empoli on Sunday.

Leon Balogun: He was rooted to the bench for the ninth time this season, watching on as Brighton & Hove Albion lost 2-1 away at Newcastle United.

Kenneth Omeruo: The Chelsea loanee has handed Rohr a bit of selection headache after helping his side to a clean sheet in their goalless draw away at Girona.

Brian Idowu: He was missing in action for Lokomotiv Moscow when they drew goalless away at Rubin Kazan.

Adeleye Olamilekan: The home-based star was also not in action at weekend with the league ending already.

Semi Ajayi: He was on for the entire match duration for Rotherham United when they drew 1-1 away at Blackburn Rovers.

Jamilu Collins: He put up a decent Paderborn as they played out an entertaining 4-4 draw at home to Holstein Kiel in the German Bundesliga.

Ola Aina: He was on for the entire match duration for Torio when they lost 2-1 at home to Parma.

John Ogu: He was on for the entire match duration as Be’er Sheva continued their rise on the league table by defeating Beitar Jerusalem 3-2 away from home.

Mikel Agu: He was on for the entire match duration, inspiring Vitoria Setubal to their fourth victory of the season as they defeated Feirense 2-1 at home. 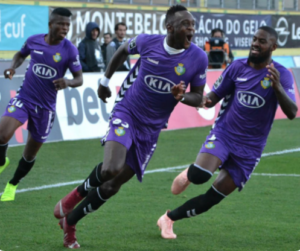 Oghenekharo Etebo: He featured for 76 minutes before being replaced by Sam Clucas in Stoke City’s goalless draw away at Nottingham Forest.

Henry Onyekuru: The Eagles forward was not goal shy as he scored a brace for Galatasaray in their 3-0 thrashing of Kayserispor.

Ahmed Musa: The Eagles stand-in captain returned to action for Al-Nassr, chipping in an assist in their 2-1 win over Al-Ettifaq.

Victor Osimhem: He was on for the entire match duration for Sporting Charleroi as they defeated Club Brugge 2-1 in the Belgian League.

Alex Iwobi: He started for the Gunners in their 1-1 draw at home to Wolves but was however replaced at halftime by manager Unai Emery.

Kelechi Iheanacho: He came off the bench after the hour mark for Marc Albrighton but could not inspire Leicester City to victory as they drew goalless at home to Burnley.

Samuel Kalu: He featured for 59 minutes before being replaced by Nicolas de Preville in Bordeaux’s goalless draw at home to Caen.

Moses Simon: He saw just one minute of action, entering the fray in the 90th minute as Levante surrendered a one-goal lead to lose 3-1 at home to Real Sociedad.

Samuel Chukwwueze: The new Eagles invitee scored his first LaLiga goal for Villarreal in their 2-2 draw away at Rayo Vallecano.

Isaac Success: He started his 4th consecutive league match, featuring for the entire match duration as Watford drew 1-1 away at Southampton.