Super Eagles defender, William Troost-Ekong has been named in the Serie A Team of the Week after the Udinese player impressed despite his side’s 2-1 loss to Empoli, AOIFootball.com reports.
The former KAA Gent defender featured for the entire match duration earning an impressive game rating of 7.8, making 2 clearances, 2 blocked shots, 1 interception and completed 100% of his tackles. 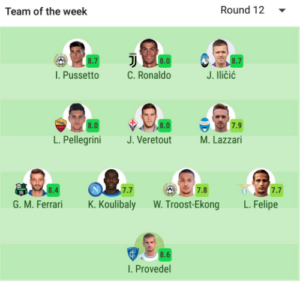 He also won a game-high 10 duels and completed 85% of his passes to sign off to the international break on a good note.
Ekong was named in a back four defence alongside Koulibali of Napoli with Luis Felipe of Lazio and M. Ferrari of Sassuolo completing the line.
Teammate Ignacio Pusseto leads the line alongside Cristiano Ronaldo and Atlanta’s Josip Illiçic after their impressive 4-1 win over Inter Milan, whilst Lorenzo Pellegrini, Jordan Vertout and Manual Lazzari of SPAL make up the midfield trio.
Ekong, 25, has featured in every league game of Udinese this season since his €3.3 million switch from Bursaspor in August.

Serie A: Nwankwo on target In Crotone’s away loss

Ligue 1 Round Up: Simon on target in Bordeaux loss; Kalu shines against PSG

Musa back on CSKA Moscow’s radar

Serie A: Nwankwo on target In Crotone’s away loss

Ligue 1 Round Up: Simon on target in Bordeaux loss; Kalu...