It was yet another fantastic weekend for Super Eagles’ young star Samuel Chukwueze who continued to dazzle in Spain, whilst there were also goals for Ahmed Musa, Paul Onuachu and Victor Osimhen.

The same cannot be said of Akinyemi who despite scoring over the weekend, suffered relegation with his Norwegian club.

AOIFootball.com takes a look at the performances of Nigerian players across the globe.

Leon Balogun, Wilfred Ndidi and Kelechi Ihenacho: Ndidi was surprisingly named on the bench for Leicester City but made an early entrance into the match for Vicente Iborra as the Foxes forced Brighton to a 1-1 draw.

Iheanacho also came off the bench to win the penalty for Vardy to equalize whilst Leon Balogun had to watch from the bench.

Isaac Success: He was introduced just before the hour mark for Gerard Deulofeu but could not stop Watford from losing 3-0 at home to Liverpool.

Alex Iwobi: The Gunners star was on for 82 minutes before been replaced by Ramsey in Arsenal 2-1 win away at Bournemouth.

Eberechi Eze and Oghenekharo Etebo: Young star Eze was the star for QPR as he grabbed two assists in their 2-2 draw away at Stoke City who did not list eagles midfielder Oghenekharo Etebo for the clash.

Semi Ajayi: He was on for the entire match duration of Rotherham United 2-2 draw at home to Sheffield United.

Emeka Eze: He scored his first league goal of the season for Sturm Graz, netting the opener in their 2-0 win over SC Rheindorf Altach.

Francis Amuzu: H was on for the entire match duration for Anderlecht but could not prevent them from losing 4-2 away at Sint-Truidense.

Victor Osimhen: He came off the bench to score his 6thgoal of the season netting Sporting Charleroi third in their 4-2 triumph over KSC Lokeren 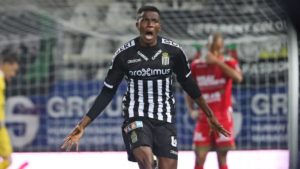 Uche Agbo: He came off the bench for Samuel Bastein after the half-hour mark to inspire Standard Liege to a 3-0 win over KAS Eupen.

Taiwo Awoniyi and Anderson Esiti: Esiti was on for the entire 90 minutes whilst Awoniyi was a second-half substitute but could not inspire KAA Gent to victory in their goalless draw at home to Royal Antwerp.

Stephen Eze: He was on for the entire match duration but could not prevent Lokomotiv Plovdiv from going down 1-0 at home to leaders Ludogorets Razgrad.

Goodness Ajayi: He was on for 86 minutes for NK Inter Zapresic before been replaced in their 1-0 away at NK Rudes.

Iyayi Believe, Godfrey Oboabona, and Musa Muhammed: Both Musa and Oboabona featured for the entire match duration but could not stop HNK Gorica from going down 2-0 at home to NK Istra. Iyayi Believe was missing in action for the host.

Ubong Ekpai: He was on for 82 minutes in Viktoria Plzen’s 1-1 draw away at Slovan Liberec.

Peter Olayinka: He took him just two minutes to make his impact coming off the bench to score Slavia Praha third goal in their 3-1 win away at Karvina 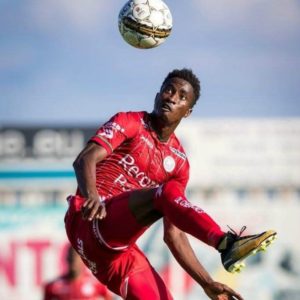 Paul Onuachu, Frank Onyeka, and Rilwan Hassan: Onuachu continued his impressive form in front of goal as he scored his 10th league strike in FC Midtjylland 2-1 loss away at FC Kobenhavn. Onyeka and Hassan also featured in the clash.

Samuel Kalu: He came off the bench for the last 15 minutes for Bordeaux in their goalless draw away at Dijon.

Jamilu Collins and Christopher Antwi-Adjei: Collins was on for the entire 90 minutes but it was another Nigerian who stole the show as he scored for Paderborn in their 5-1 spanking of 1.FC Heidenheim

William Troost-Ekong: He once again put up a masterpiece showing, keeping a clean sheet for Udinese in their 1-0 win over AS Roma.

Joel Obi: He was on for 65 minutes before been replaced in Chievo Verona goalless draw away at Napoli.

Orji Okonkwo: The young star was confined to the bench for Bologna in their goalless draw at home to Fiorentina.

Afeez Aremu, Adeleke Akinyemi, and David Babajide: Both Akinyemi and Babajide were on the scoresheet for their respective clubs when Haugesund hosted IK Start but it was IK Start and Akinyemi who left the stadium in tears as they lost 3-1 a result which ultimately relegates them to the lower league next season.

Matthew Ifeanyi and Raphael Ayagwa: Ifeanyi was on for the entire match duration while Anyagwa was rooted to the bench in Lillestrom 2-0 win over Kristiansund BK.

Ahmed Musa: The Eagles stand-in captain scored the winning goal for Al-Nassr in their 1-0 triumph over Al-Shabab.

Stephen Odey: He was on for the entire match duration od FC Zurich 3-3 draw away at Neuchatel Xamax.

Blessing Chibuike Eleke: He featured for the entire match duration of FC Luzern 1-1 draw at home to FC Basel.

Kenneth Omeruo: The Eagles’ defender featured for 90 minutes, keeping yet another clean sheet to help Leganes to a 1-0 win over Deportivo Alaves.

Moses Simon: He was on the bench for the entire match duration of Levante 2-2 draw away at Huesca

Samuel Chukwueze: The young forward scored his second league goal for Villarreal netting what proved to be the winning strike in their 2-1 win over Real Betis. 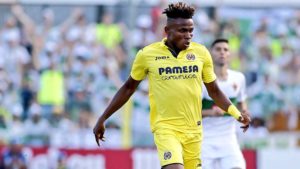 Aminu Umar: He grabbed an assist for Caykur Rizespor in their 1-1 draw away at Sivasspor.

Henry Onyekuru: He was on for the entire minutes of Galatasaray 1-1 draw at home to Konyaspor.

Ogenyi Onazi and Anthony Nwakaeme:  Both players where in action for Trabzonspor as they defeated Fenerbahce 2-1.

Samuel Eduok:  He helped set up the second goal for Josue Sa as Kasimpasa reclaimed second spot with a 3-0 win over Yeni Malatyaspor.

Abdulquadir Adedapo - May 29, 2018
ALL CATEGORIES
SOUNDCLOUD