With just few days to the New Year, Super Eagles’ and Galatasaray of Turkey forward, Henry Onyekuru has said he was delighted to finally break his long-awaited goals drought with a brace on Sunday, and that it was good for him to end the year on a high, AOIFootball.com reports.
Speaking exclusively to AOIFootball.com after the game, the Everton loanee said that making the 2019 AFCON team and winning the tournament remains his major objective in the New Year. 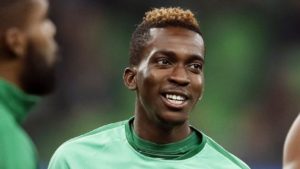 “It feels good ending the year with a brace and most of all getting the three points at home for the club and fans. The target still remains the same: try to score as many goals as I can and also help the team achieve its goals come to the end of the season.
“Yes, the national team is also there for me; part of my target, if not the number one, is to make the team, go to the Nations Cup and then make Nigerians proud,” Onyekuru added.
Since making his move from Everton in the summer, the former KAS Eupen striker has scored six goals in 15 league appearances, making him the club’s joint scorer in the league with Galatasaray currently sitting joint second on the league table with 29 points from 17 games.