It was not the best of outing generally for Nigerian players in Spain, with the duo of Kenneth Omeruo and Ramon Azeez the standout performers of the weekend after they impressed for their respective teams.
The same however cannot be said for Eagles’ goalkeeper Francis Uzoho who will have to work extra hard in training after he was surprisingly dropped in favour of a new signing.
AOIFootball.com brings you up to speed with their performances which also include a bench role for one Super Eagles’ goalscoring legend.
KENNETH OMERUO: As expected, the Leganes defender returned to the starting XI for Saturday visit of Huesca with Omeruo impressing for his side as they return to winning ways with a 1-0 triumph over their visitors.
With the result, the Nigerian has kept a clean sheet in 6 of his 12 leagues start with Leganes moving four points clear of the relegation zone.
SAMUEL CHUKWUEZE: The Eagles’ young star also returned to the starting XI following last midweek cup rest, but he was on the losing side as Villarreal paid the price for a lackluster performance in their 1-2 loss at home to Getafe. 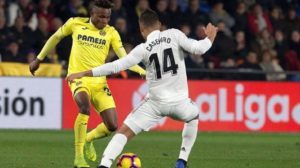 Chukwueze was however withdrawn three minutes before the hour mark for Karl Toko Ekambi with the forward completing an abysmal night for the Yellow Submarines when he missed the last minute penalty that could have earned his side an equalizer.
MOSES SIMON: After impressing in Thursday’s night Copa del Rey win over Barcelona, the Eagles’ winger had to make do with a place on the bench as Levante visited the Estadio Wanda Metropolitano seeking their first win on the ground.

However, the Nigerian did not get a chance to play as he was an unused sub as Atletico Madrid rallied to a 1-0 victory over Levante.

FRANCIS UZOHO AND IKECHUKWU UCHE: In what could now become a potential serious headache for the Eagles’ technical crew, goalkeeper Francis Uzoho had to do with a place on the bench for Elche as they defeated Gymnastic 1-0 at home with Former Eagles’ striker IK Uche also warming the bench for the visitors.
The Nigerian was overlooked for new signing Edgar Badia who joined the club last week on a free transfer from Rues Deportiu with both shot stopper’s now condemned to fight for the number 1 position at the club.
RAMON AZEEZ: The 2014 World Cup player produced another impressive display in the middle of the park as he marshalled CD Lugo midfield in their 1-1 draw at home to Extremadura UD.
The result will however come as a setback for Lugo in their quest for promotion haven dropped to value points at home.
JAMES IGBEKEME: The 23-year-old was on for the entire match duration but could do little to help his Real Zaragoza side as they lost 2-0 at home to promotion chasing Malaga.
The midfielder has started in 14 of his 17 league games this season, scoring and assisting on one occasion with the club just one point above the relegation zone on 16th position with 22 points from 21 games played so far.