Ahead of the Super Eagles’ doubleheader fixtures in March against Seychelles and Egypt at the Stephen Keshi Stadium in Asaba, one of Nigeria’s leading pitch expert, Ebi Egbe who is the MD of Moni Michelle Construction Company, has revealed his company can fix the Asaba pitch in record time, given the right logistics, AOIFootball.com reports.
After complaints by the technical crew of the Super Eagles that the Asaba pitch was sandy and slows the pace of football, the pitch expert told AOIFootball.com exclusively that he if the Delta State government releases the funds, the pitch will be fixed before the matches.
“I can get the pitch ready in five weeks if I have the money in the bank; we can upgrade the stadium to the same state as the Enyimba pitch. 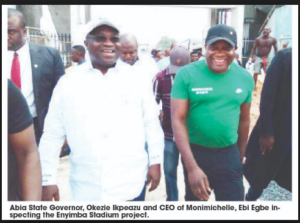 “I can complete the civil works in three weeks. Because of the urgency, we can air freight instead of sea freight. I have done it for a client in the past and believe we can do it again,” he stated.
He further revealed that although he has not been contacted by the Delta State government officially, his company remains keen on ensuring Nigerian pitches continue to compete with the best in the world and produce quality football.