*Plans to spread gesture across the country
Super Eagles’ and Galatasaray of Turkey forward, Henry Onyekuru has vowed to continue supporting the less privilege and touching lives around the country after donating food items and a cash gift to some less privileged schools in Jos, AOIFootball.com reports.
The Everton loanee, who said he remains committed to help reduce the level of poverty in his own little way, told to AOIFootball.com that it has always been a part of him to reach out to the less privileged in the society. 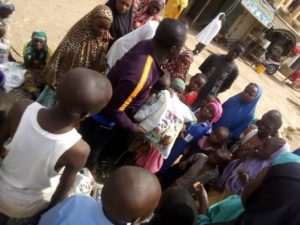 He also added that the Jos gesture was not the first time as he also gave out cash and food items to orphanages last year in Lagos and plans to spread it across the country very soon.
The Eagles’ star gave out bags of rice in large quantities as well as cash donations to Tilde and Almajiri School in Bukuru, Jos.