Exclusively speaking to AOIFootball.com, the SC Paderborn left back, said he watched Celestine Babayaro in his childhood days and learnt a lot from his playing style.

“Growing up, Babayaro’s name was on the mouth of every Nigerian football fan, so I started watching him as a kid and I became a fan of his playing style which I have tried to adapt over the years,” Collins said. 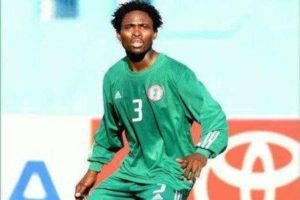 The 24- year-old also asserted that Real Madrid’s veteran defender Marcelo Vieira is another beautiful left back of the game he watches regularly and also loves his defensive techniques.

Jamilu has been ever-present for the German side this season, putting in a series of impressive displays.

SC Paderborn is currently 3rd on the German second division log but will be hoping for a promotion to the 1st tier with a victory against FC Heidenheim on Sunday.