The Akinwunmi Ambode Testimonial game to Send forth the outgoing governor of Lagos state, tagged ‘The Match’ has now been officially moved from the newly designed Onikan Stadium, on the Lagos Island, to the ‘Soccer Temple’ Agege Stadium, Lagos.
The change of venue was confirmed by the General Coordinator of the event, a former Chairman of the Lagos State Football Association, Waidi Akanni.
Akanni, who is also a former Super Eagles player, said on Tuesday in Lagos that, the venue of the Ambode Testimonial match, which would see the likes of former World Footballer of the Year and President of Liberia, George Weah, in action among other retired top African soccer legends, was moved from the Onikan stadium because of the ongoing work at the facility that was completely rebuilt by the outgoing governor.
The organizers of ‘The Match’ which also include two other top ex-Super Eagles players; Samson Siasia and Mutiu Adepoju, noted that the kick off time of ‘The Match’ has been fixed for 2.30pm on May 18, 2019. 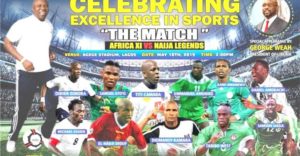 The trio of Akanni, Siasia, and Adepoju noted that the VIP tickets will go on sale on May 5 at various outlets to be announced by them.
The team of African Legends that would play against ex-Super Eagles stars, would aside from having President George Weah, have Michael Essien, Samuel Eto’O Fills, Abubarkar Titi Camara, El- Hadji Diouf, Didier Zokora and Yaya Toure, among others. They have all confirmed their presence at ‘The Match’. Meanwhile, the last minute confirmation is expected from the managers of Didier Drogba.
While the ex-Super Eagles legends would among others include: Nwankwo Kanu, Daniel Amokachi, Taribo West, Victor Ikpeba, Emmanuel Amuneke, and Mutiu Adepoju.
A three-man coaching crew for the Nigerian legends would have; Augustine Eguavoen, Joe Erico and Henry Nwosu.
The Match which is a fusion of sports and entertainment would witness first-class performances by popular Nigerian artistes.
Spectators at the event, according to the organizers will win jerseys, soccer balls and other gifts at the raffle draws at half time.
The General Coordinator, Waidi Akanni, disclosed that part of the proceeds of the event will go to charity and scholarships for underprivileged kids in Lagos state.
Already, over 1000 kids have benefited from the Ambode Testimonial Soccer Clinic held a month ago at the Campos Square, Lagos.
These kids will be brought back to meet with the African legends hours before the kick off of ‘The Match’ on May 18.
The Governor Ambode Testimonial Match is obviously going to be the biggest gathering of former African football stars on the planet in Lagos.