Former Chelsea of England midfielder and Super Eagles captain, Mikel John Obi has revealed that former Blues’ gaffer Antonio Conte stopped fielding him because he represented Nigeria at the Rio 2016 Olympics against his wish, AOIFootball.com reports.

Mikel, who led Nigeria to its only medal at the games, further advised upcoming players not to be influenced by greedy agents who want to make money from them, whilst urging them to remain patriotic in their quest to serve the nation.

“For me, it was a decision I had to take because when the opportunity came up to either go to Rio or play for Chelsea.

“I decided that Victor Moses, who was the younger and hasn’t played yet for the club, should stay back while I go to the Olympics. 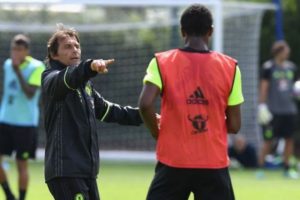 “Victor stayed back and I went but when I got back the manager never spoke to me again and did not even put me in the team, so I had to leave the club. For me, my commitment to play for the national team will never change till I stop playing,” Mikel said.

Mikel joined Chelsea in the winter of 2006, spending 10 seasons before leaving the club in January 2017 after dropping down the pecking order.

I’m excited to have scored my first goal in Turkey, says Azubuike Okechukwu