Super Eagles Captain, Mikel John Obi has praised the performance of the Super Falcons after their 1-0 loss to host nation France, urging the team not to relent in their quest to reach the knock out stages of the World Cup, AOIFootball.con reports.

Mikel, who watched the match with his teammates, said after their training session on Tuesday that the Super Falcons should continue flying the country’s flag high despite being underdogs.

“I just want to say well done for your efforts. We have been watching from our camp and have been keeping a close eye on the team. 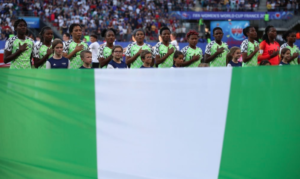 “You have been doing amazingly well. You lost yesterday (Monday) but you guys played wonderfully well. It’s a shame it ended the way it did but hopefully you guys can still make it through,” Mikel said.

A victim of the VAR at the 2018 World Cup in Russia, the former Chelsea midfielder declined being drawn into the argument of the controversial decision by the VAR but instead stated that the Super Eagles players remain behind the team and would continue to cheer them to success.

After finishing third in Group A, the Thomas Dennerby-led girls will have with permutations and pray result elsewhere go in their favour as they bid to make it to the knockout stages for only the second time in the country’s history.