The 2019/2020 Italian Serie A season started on a good note for the duo of Kingsley Michael and Ola Aina with the latter impressing on his first start for his team, AOIFootball.con reports.

Kingsley Michael: The Flying Eagles midfielder basked in euphoria the weekend as he impressed on his league debut for Bologna in their 1-1 draw away at Hellas Verona.

The 20-year-old who made his first competitive debut in last week Copa Italia clash against Pisa kept his place in the team for the trip to Verona on the opening day of the league season.

Nicola Sansone put Bologna ahead from the penalty spot on the 15th minute before the hosts struck back through Miguel Veloso six minutes after the half-hour mark as both teams went into the break level.

Michael was then replaced 13 minutes from time as the visitors held on to a 1-1 draw, with the Nigerian finishing with a game rating of 7.0, completing 91% of his passes, winning 7 duels and also making 1 interception and clearance.

Ola Aina: The Eagles wing-back had to do with a place on the bench for Torino’s first game of the season as Sassuolo came visiting at the Stadio Olimpico. 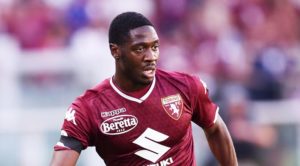 Simone Zaza set the ball rolling for Torino in the 14th minute before Aina made an early introduction to the clash at half time as he replaced the injured Cristian Ansaldi.

Zaza then added his second of the game ten minutes after the break before the visitors got what proved to be a consolation goal via the boots of Francesco Caputo on 69 minutes.

Aina did give a good account of himself on the pitch as he had a game rating of 6.6, made 2 clearances, won 100% of his duels and tackles and also completed 78% of his passes.

Serie A: Moses sets up winner; Ekong shines for Udinese