Super Eagles new invitee and Glasgow Rangers of Scotland midfielder, Joe Aribo has vowed to make the most of his call up to the senior national team of Nigeria, AOIFootball.com reports.

Born in Camberwell, London, the native of Ondo state told the Super Eagles media channel that he was extremely excited with the call up and now wants to do all within his powers to help the team improve as a stronger unit.

“I’m really happy to have got this callup to Nigeria and I just want to make the most of it and also play as long as possible to do all I can to ensure we continue being the best national team,” Aribo enthused.

The 23-year-old who will be eyeing his first cap against the Ukrainians later on Tuesday evening however gave insights on what the Nigerian fans should expect from him if given the chance by the coach. 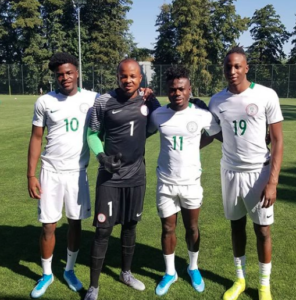 “I’m a central midfielder and I like to get in and around the box, help the team defensively and also add more bite to the attacking strength of the team,” Aribo concluded.

Born Joseph Oluwaseyi Temitope Ayodele-Aribo, the Rangers midfielder came through the ranks at English side Charlton Athletic where he spent four seasons with the League one side making 97 appearances and netting 17 goals in the process.

He then helped the club return to the Championship after a three-year absence following their triumph in the playoffs last May but opted on renewing his contract with the club, joining Rangers on a free transfer before being handed a call-up by Nigeria.