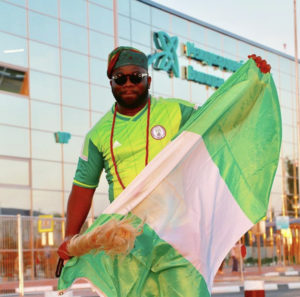 *Says Nigeria must move on

Foremost Arsenal of England supporter Dr. Kelechi Anyikude has said that the duo of Tammy Abraham and Fikayo-Tomori have earned their rights to play for the Three Lions, AOIFootball.com.

Popularly known as Dr. Kelechi on several social media platforms, the Arsenal supporter, who remains a key admirer of Nigerian players in England, told AOIFootball.com exclusively that both players would have been added advantages to the Eagles’ squad.

“It is, what it is but we have to be honest with ourselves. Those guys were born here (England) and they trained here so if they decide to play for England it’s fair play.

“Nigeria has more than enough talents even in the diaspora. For example, if you look at the Arsenal youth team you will find plenty of Nigerian names.

“I don’t think we will lose from it; their talents would have been an advantage to the team but we won’t lose out because we have Osimhen doing so well and our defenders are also doing great in their clubs,” Kelechi said.

Dr. Kelechi went on to add that Nigerians must begin to understand that not every eligible player will play for the country as some will still choose other countries.

“Not everyone will play for Nigeria; some will definitely play for England so we should learn to respect that. We have to make the approach and show them the benefit of playing for Nigeria. If they agree, that will be good but if they don’t, then we must move on from it,” he concluded.