Former Super Eagles captain, Joseph Yobo has said that his appointment as the assistant coach of the Senior National Team will come as a massive boost to the Eagles’ defence, AOIFootball.com reports.

The 2013 AFCON winner, who begins his assignment as coach next month when Nigeria takes on Sierra Leone, stated in an interview monitored on Brilla FM, said that he will most definitely bring his wealth of defensive experience to the backline, whilst also pursuing his coaching badges. 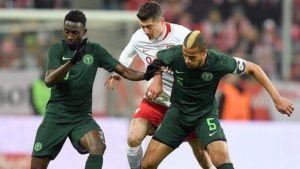 “I want to add my dear quota to the development of the team; as a former player and captain, I will like to bring my defensive capabilities into the team and I believe it will be a massive improvement to the backline.

“I also want to learn from the coach because he has done well since taking over the team and it will be an honor to learn under him whilst I also pursue my UEFA/CAF badges,” Yobo said.

Capped 101 times for Nigeria, the former Everton defender his no doubt one of the country’s finest centre-backs ever having played for a period spanning 13 years where he featured in 3 World Cups and 6 Nations Cups, leading them to the 2013 triumph in South Africa.

I have the quality to succeed at FC Porto, says Nwakali